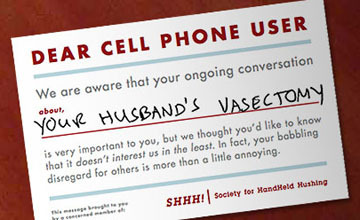 There’s elevator etiquette. (Try being the last one on, and face the back, rather than the doors.) There’s dinner protocol. (Try eating with your bare hands in New York, with a fork in Japan, or chopsticks in Louisiana) There’s baby protocol. (Try changing your baby’s diaper on the bridal table at a posh wedding reception or at the reception desk at a hotel). There’s golf course etiquette and pool etiquette and bike riding etiquette and gym etiquette.

Why, in God’s name, don’t we see an emergence of cell phone etiquette? When will folks learn to turn their cell phones off while they're at concerts or when speaking before large groups? I’ve witnessed a guest speaker who, in the middle of a presentation to the entire student body at my school, answer his cell . I've had to poke the shoulder of a parent who answered her mobile while her daughter was playing a violin solo. The worst part of these scenerios aren't that they disrupt events. The tragedy is that cell phone users seem oblivious the the fact that they are being rude and inconsiderate.

Many cell phone users speak about very private matters in very public places. While on a shuttle to the airport, I once heard a woman talk for over half an hour about her belly dance gig, her new tattoo on her left breast ("GAWD it HURTS, ya know?") and how X was SUCH a better lover then Y. But how was she going to get rid of Z? It took such discipline for me not to yank that phone out of her hand and throw it out the window.

Some folks are taking action. I simply adore Michiel’s very funny, harmlessly violent phone/train sketch proposal at Musings from the Void. Another way to scold the mis-behavin’ is to use the “Dear Cell Phone User” cards” available from the Society of Hand Held Hushing which uses humor to help remind people to wise up.

Until my cards get printed, my dear readers, I’ll continue to use my stun gun.

Posted at 08:35 AM in Humor, Society, Technology, Woes | Permalink

Oooh stun guns; I should've thought of that ;)

The two examples you cite (guest speaker in the middle of a presentation and a parent who answered her mobile while her daughter was playing a violin solo) are far worse than any I've ever encountered. No, wait. I once went on a date with a girl who would get called every 5 minutes by her friends. I ended the date by the 3rd call (what can I say, I really liked her at the time) and she thought *I* was rude. Amazing. Man I should've bought a stun gun sooner. Life is so much easier when you can just shock the hell out of people for no good reason.

Anyhow, glad you liked my little sketch, it's the first one I decided to make public.

I don't find myself so offended by cell-phone users for some reason. I find them quite handy during the day when, as a stay-at-home-mom, I get bored and want to chat with my husband. I would be entirely appalled if someone started chatting during a movie but I figure the more people keep in contact the better. Wow, I sound like a cell-phone commercial, don't I?

Hmm..
It seems to be interesting... I write my blog too.