We arrived on a cold, full-moon day to this city of marble statues, cobblestone streets, gothic churches, and really good, cheap beer.

I had never visted Eastern Europe, and though I was prepared for the sights, I wasn't 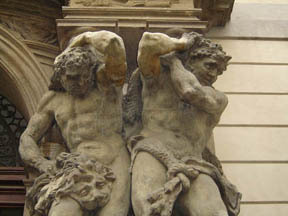 prepared for the cold. Just in from South East Asia, where the humid temperatures hover around 90 degrees, I bought a coat and a hat from the first store I passed. Soon after: a scarf. I never took them off, except to sleep.

Nacho arranged the get-away. We discussed Berlin, perhaps Barcelona. In the end, we hopped on a last-minute flight to Prague. Our time there was short, but we managed to see a classical music concert in Old Town, drink shots of whiskey at a trendy bar where Brad Pitt and the Hollywood crowd hang out when they're in town, catch trams, and learn the metro system.

On day two, Nacho and I set off to visit a small church dedicated to Saint Loretta, a 30 minute walk from the castle. Known for its healing powers, the sight was beautiful in a cold, classical sense, but it felt vacuous as a morgue or mausoleum. We sat in the 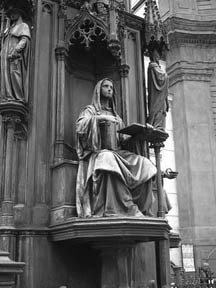 pews of the church for a long time, waiting for some sort of insight, but I felt nothing. And, I certainly wasn't healed from that nasty cold that I caught in Holland. My impression is that the church is empty, the spirit gone a long time ago. I mustered up what little spirituality I had left within me to say a little prayer, but honey: it came from within me, not from the place. As we walked out, I turned to Nacho and said, "I think I'm more Buddhist." His prompt reply, fresh out of living in the Middle East, was, "I'm definitely Muslim." We laughed, having both been raised in churches, not pagodas or mosques.

I will always remember Prague for it's great-tasting beer (and I'm not a beer drinker), the cappuccinos, the gas heaters at the park cafes, and the large marching band in bright red uniforms that suddenly came around a quiet corner and disappeared down the street. I will remember the stern faces of those on the trams and the metro escalators that move up and down from the bowels of the earth at a 60 degree angle. I will remember the 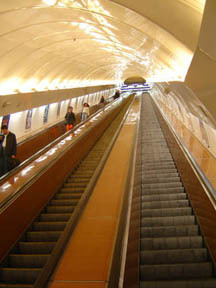 skyline stenciled with cupolas and spiraling steeples carved of marble and pressed in gold. I will remember the shops of the back alleys, the artists, the statues, and the music. I will remember Charles bridge, the jazz band that played on the river, the changing of the guard, and the newlyweds who crossed the bridge in the freezing cold.

The moon was waning the day we left the city for the airport. The female taxi driver (was he a she? was she a he?) played Czech national songs on the radio at full volume. It sounded out of place in the silence of the dark streets at 5:30 am, as if I had awoken to a raucous, never-ending carrousel ride.

although prague isn´t berlin...;-)) it really rocks! make sure you drink some real ABSINTH. try EVERYTHING afterwards! you´re so close to me baby! miss you

hey, bluest eyes. Just tried to delete the repeat entry, and accidentally deleted the the other comment. sorry. from now on, i leave as is.

wish we could have seen each other in Berlin... next time!

Ahh, it makes me wonder when I will get to board a last-minute flight to somewhere new. Hell, I'd even settle for a trip to the toilet alone these days. Do I sound like I have a siamese twin attached to me? Well, we're actually triplets; one is stuck to my breast, the other attached to my answers, both stuck to my heart.

"one is stuck to my breast, the other attached to my answers, both stuck to my heart."- beautifully written.

Love and attachment: two words that are so often synonyms.

Some days, the only "last minute ticket" I want to buy is to your town with the dusty roads and the Rio Grande. Today I want to snap my fingers and be immediately transported to that quaint adobe house of yours to visit the triplets. We could drink herbal tea and organic veggies and catch up on each others' lives.

One day soon, my sweet mermaid of a sister with the sea-dolphin eyes, one day soon.