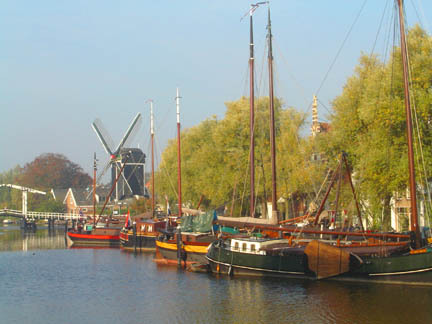 Donna Quixote gets her idealistic fingers slapped during last week's trip to Holland. But that's okay. She brought home a case of siroopwafelen.

One of the student vocabulary words to learn last week was quixotic, which means "idealistic and impractical." I, like Don Quixote, the Cervantes character who spends his life fighting windmills as if they were an enemy force, had my own, metaphorical windmills to fight last week in Holland.

And I, like Don Quixiote, was faced with my own idealism that some would call naivete. Someone once said, “Love is stupid.”… or was it “being stupid together”?

Whatever the case, the windmills of Holland will always be for me a symbol of change.

The cycle of life moves and pushes us onward.

Thank God for friends like Mr. Strong, who didn't even blink an eye when I arrived in Rotterdam all teary-eyed, with the flu and a broken heart. He fed me hot tea and spaghetti and gifted me with medications to help my feverish shivers.

But don't let appearances deceive you. They are delicacies: two thin, crisp miniature waffles filled with a thin layer of delectable caramel and, when popped in the microwave for seven seconds: ooo-la-la. Superb.

They make all your troubles go away.

As does a marathon movie-watching bonanza.

And a listening ear.

And a reminder that boyfriends come and go, but good friends: they're there through the thick and thin.

I brought a case of siroopwafelen back to Asia to give as gifts.

I've sealed them in zip-lock bags in an out-of-sight place, along with the numerous blocks of Dutch cheeses that I hand-carried on the flight back. But who am I fooling? I know where they are.

Last night, jetlagged and sleepless at 2 am, I snuck in to the pantry and opened my first packet of siroopwafelen. (Notice the word "first.")

If I don't give them away soon, they'll be gone by the end of the week.

From now on, I will always remember Holland not for the canals or the ever-changing windmills of the legendary Don Quixote, but for the delicious morsels that melt on the tongues of all those who are hopeful and naive, kind and caustic, delirious and sane.

I will sit my quixotic butt down and tell myself to keep believing that even if an idiotic heart gets broken over and over again, it eventually heals.

And, in the end, here's nothing that a hug and a few siroopwafelen can't handle.

Leave it to Americans to put our national delicious delicate delicacy in their barbaric microwave.

Wow, that was really well-written. I hope your're feeling better.

Michiel: I don't own a microwave, but Expat does. I arrived home to my oven-less, microwave-less home, and tried eating them "cold", but it just wasn't the same. Next time, I'll heat them in a pan on my two-burner stove. They taste ten times better when they're warm.

Glad to be of assistance my dear lass. I am happy to have introduced you to the Dutchy treat of stroopwafels and despite what Michiel says, they taste great when they come out of the microwave!

quote:"And a reminder that boyfriends come and go, but good friends: they're there through the thick and thin". I would also add some italian wisdom to that with this saying we have: "when a pope dies,soon they make another one", which is basically the same story: in few weeks you'll be all excited for this new guy that you just met...and so with the next one...and further next one...!! love you!!

Perhaps my naivete is rearing its quixotic head, and I should settle for passionate trysts with charlatans, but I won't. I'd rather be alone than in a dead-end relationship.

Today I came across this quote by one of my favorite authors, Annie Dillard:

"If we listened to our intellect, we would never have a love affair. We'd never have a friendship. We'd never go into business, because we'd be too cynical. Well, that's nonsense. You've got to jump off cliffs all the time and build your wings on the way down."

Reminds me of what someone else once said(and I can't remember who): "Jump, and the net will appear."

For some reason, after some moping time, and time for licking my wounds, I always end up jumping off the cliff again.

The jump- the risk- is what makes me feel alive.

I'll get there again.

It will just take a while.

Oh, Sweetie.....I know that you won't stop jumping off those cliffs. You are my idol. You are brave, beautiful and freeeeeeee!

I love the Annie Dillard quote. Taking leaps is what life is about. Absolutely.

Hey, Pups! thanks for kudos.

And, for the record: YOU are my idol!

I came across your ppt the other day when I was googling something else- the "Expand Your Horizons with a Job Overseas" ppt. ... how cool is THAT? I downloaded it: great job, and wish I could have been in the audience when you presented.

We miss you here, da-a-ling.... your long, flowing house dresses, your zaniness, your animated story-telling, and especially your willingness to take great leaps off of high cliffs, especially for love.

I would like to find a website that carries these siroopwafelen online - our Dutch friend introduced us to them, but now that we are addicted, we can't find them here! They came in a dutch blue tin with 10-15 cookies inside. Can anyone help us?

Nancy: I wish I could be of help, but I don't know where you can find siroopwafelen online. I bought mine by the case in the Amsterdam Airport, and handcarried them on the plane.

My suggestion is: stock up! They're hard to find!