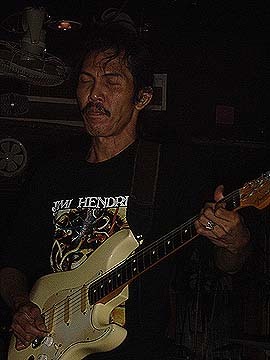 My first night in Chaing Mai: too many Mai Tais, not enough tuk-tuks, just enough Italian wine by the river.

Best of all? Jimi Hendrix songs and R and B.

Mr. Pesto and I couldn’t have been happier to be out of Y. and in a town where there was decent, live music and restaurants we’d never visited. We were like two kids in a candy shop.

There's nothing like a few Mai Tai's at the Riverfront Bar where a live band plays songs from Buena Vista Social Club and where floating boats lit by candles float by. We weren't sure if our waitress was a girl or a boy (we disagreed on the gender), but such is life in Thailand, and who the hell cares, anyways? After an hour or so of catching up on the latest in our respective lives, and a bit tipsy, 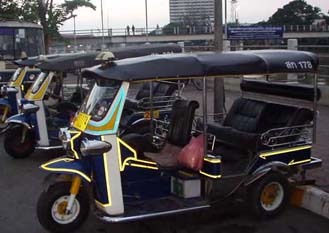 to boot, we hopped into a tuk-tuk, one of Thailand's motorized rickshaws so named for the sound of their engines. There's nothing better, folks, than a warm evening riding the flowing streets of Chaing Mai in your own, personal, motorized gondola. No, it wasn't Venice. But it certainly wasn't Y., and that in itself was enough to make Mr. Pesto and I grin like a bunch of kids fresh off the farm. We didn't know what to do first! Imagine a town with restaurants we'd never visited! Imagine expats we hadn't met! Imagine night clubs all over town where live bands with real musicians played original songs!

In true Italian tradition, we headed off to the The Gondola, where the food was almost as good as La Operetta and where the outdoor courtyard had a nice view of the canal. Then, we walked through the streets in search of a good band. And find one we did: down by the river, in a smokey bar, we found Thailand's version of Jimi Hendix. This guy could wail. After my second Johnny Walker on the rocks, I was ready to be a groupy. Really. So, I took out my handy-dandy Sony Cybershot and took this picture. Actually, I took a lot of pictures. This was the only one that turned out. I wonder why.

Then it was down to the river where we discussed atoms and quantum physics, the Wabi-Sabi nature of existance, the difference between religion and science, and the significance of home and the constellation Orion. Mr. Pesto insists that my parents know me better than I think they do, and I insist that unhappiness is the human condition.

All in all, a good first night in Chaing Mai. All in all, a good way to spend Thanksgiving Day: thankful to be out of Y. in a warm and beautiful place that's free and wild and lovely, and thankful for good friends met in faraway places where the conversation, the whiskey, the music, and the weather is just right.

Posted at 08:41 AM in Entertainment, Ex-Pat Life, Food and Drink, Travel | Permalink