« Jimi Hendrix in Thailand | Main | In Your Face: Facing Your Fears » 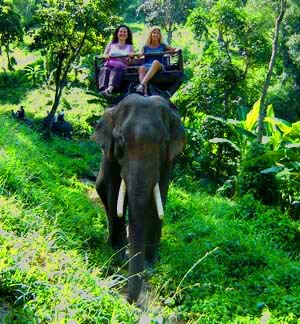 Dragon Queen and I in the "jungles" of northern Thailand.Since a turkey was nowhere to be found, and since an attempt to bring the Thanksgiving tradition into Y. would be futile without an oven or a bird that Uncle Larry just shot out in the corn field, I decided to simply forget the bird and all the trimmings. Instead, I was grateful to spend part of my Thanksgiving holidays on the back of a beautiful, gray, lumbersome jungle beast.

I've always been fascinated with elephants: their big feet, their cumbersome ways, their snake-like 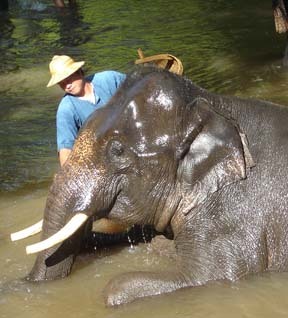 trunks, and wrinkly skin. I might have seen one up close at a traveling circus once, but never in the jungle where the bamboo and bananas grow wild, and never near the rivers where they bathe. So, when offered the chance to visit an elephant farm, I jumped at the chance.

Little did I know that I would be faced with a fear that I never knew I had: the fear of elephant trunks.

Yes, Little Miss Jump-Out-of-Airplanes-for-Fun, Little Miss Ride-on-a-Motorcycle-Solo-Across-Three-States, Little Miss Swim-in-the-Amazon-with-Piranhas is deathly, inexplicable afraid of elephant trunks. Mankato (who has known me since Bolivia days) found it quite amusing to watch me scream in fright when two elephants decided to fight over the bunch of bananas in my hand. They came at me, snorting from behind, and before I knew it, the whole bundle of raw sugarcane had disappeared into the mouths of those beasts, along with the bananas. 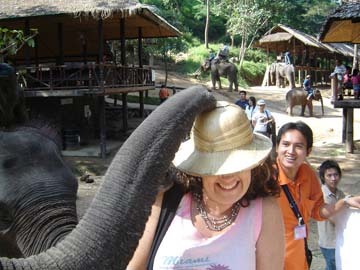 trunk took the hat off of one of the trainers, plopped it onto my head, and then proceeded to "tap" it incessantly. It felt more like a jackhammer knocking on my head than a tap, but .... whatever.

I was just glad when the three elephants behind me moved their wet trunks to some other victim.

Meanwhile, Dragon Queen was cool as a jungle cucumber, standing there as if she were drinking tea at a quaint garden party.  With giant elephant trunks moving around her face like Medusa hair, she was smiling like Tarzan's Jane as she held the painting that one of the elephants had just painted. (Yes, it's true: the 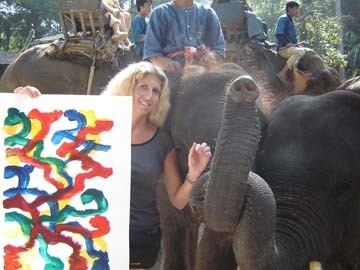 elephants are trained to paint.) Although already quite high on my respect list, she has now moved up more than a few notches.

That woman be braver than Xena.

Despite the trunks, I must say that I find elephants to be beautiful creatures. Their eyes show them for 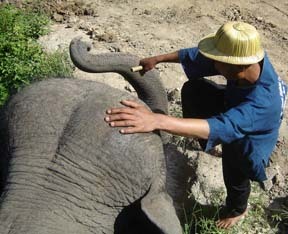 the the "old souls" that they are, and their flapping ears are magical. High on the saddle that swayed left and right as we climbed hills, Dragon Queen and I couldn't help but feel like jungle queens. And how cute is it to see how they curl those (nasty) trunks to their trainers as a steps? And what about that leathery skin and those huge tracks in the mud, two feet in diameter?

I must say, though, the path along the mountain was quite narrow at some points, and the drop off along the right side reminded Dragon Queen and I of the roads to the Yungas in Bolivia: the most dangerous road in the world, according to National Geographic. Years ago, we drove that road many times on our way to the Yungas. We were fine on our perch atop our 15 year old elephant until he stumbled and leaned precariously over the edge. I wasn't close enough to the side to see the steep drop, but Dragon Queen was. She screamed and made an attempt to jump off the saddle. All was well, the elephant gained his footing. Later, we laughed when we saw a male elephant urinating: his member was as long and stiff as his legs, and reached the ground. "Had we known that," Dragon Lady said with a laugh, "he could have used that as a kick stand to keep us from falling off the cliff!" Just the thought made me LOL. Let me tell you, ladies, certain appendages of male elephants are quite.... impressive.  :-)

Many of my colleagues have ridden elephants in India, Cambodia, and Africa.

Given the chance, I'm riding one again.

I'll just be sure to hang on to my hat.

Posted at 07:13 AM in Entertainment, Ex-Pat Life, Travel | Permalink

Great story, glad to hear that it was a good Thanksgiving for you.

And thanks for the tip about the elephant apendage - I'll be sure to NOT get into a 'pissing' contest with one! :)

HEY!!! i LOVE the pictures! Melissa and I rode the elephants at the same place. We watched them play soccer and paint too. Isn't it amazing? I am so happy you got to go there. Is it your first trip? If so, I'm sure it won't be your last. Chiang Mai was one of the most funnest places i've ever been....EVER! (that's from Legally Blond). It's almost like an Asian Antigua. Love you!

"Asian Antigua": I see the metaphor, Freddie. What great memories we had of that Guatemalan village with Italian coffee and biscotti. The only thing missing in Chaing Mai is the silouette of a volcano. Sad thing is: these towns can't remain a secret for long. They all become, eventually, too tourist-y.

Yes, this was my first time to Chaing Mai, and I'll be returning, for sure. Four days is NOT enough time. As the token Carrie Bradshaw in Asia, I spent way too many bhat on sex-in-the-city shoes at The Ginger boutique. :-) You would have been proud of little-old-Mennonite me, Freddie, as I bought clothes and shoes with sequins and beads! You have been such a good influence on me!

Little did you know you were riding that elephant on my birthday! I loved the story and the photos...vicarious thrills.

Happy (belated) birthday, Hyacinth. Where were you on your birthday... Mt. Rushmore, perhaps, with Abe? :-)

Welcome to the blogosphere, and congrats on your new blog!