« In Your Face: Facing Your Fears | Main | “Chase the Moon Across America” »

"But If I Look Up at the Stars, My Wig Will Fall Off!"

A two hour drive out of Y. you will find one of this country’s best kept secrets: the 40-square-mile 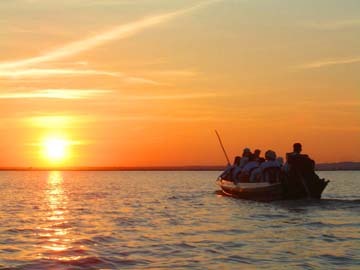 wetlands filled with water chestnuts, eels, lotus flowers, lily pads, snakes, reeds, water buffalo, and many species of wing-ed creatures such as dragonflies, mosquitoes, moths, and feathered birds of many colors. Add to this scene a group of fun-loving, outdoorsy folk willing to wear wigs while dining under the crescent moon, plus coolers (or, as the Aussies call them, “Eskys”) full of good eats, and you’re bound to have a great time. 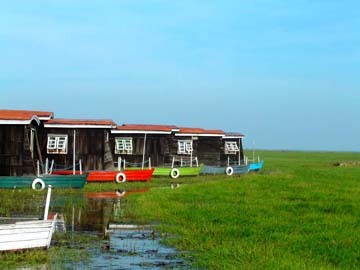 We were Americans, Aussies, Kiwis and Brits, bound together by a (semi) common language, a desire to be out under the stars, and our love for Pancake, whose big three-o was celebrated in the finest of style, thanks to Jacque O., the Queen of Festivities. 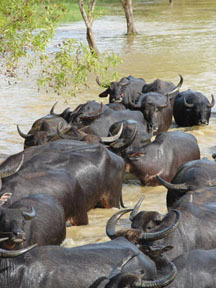 Our cabins were built over the water. Except for the occasional splash of a fish or a night bird, we were surrounded by one of the most beautiful sounds of all: silence. In the morning, the view out our cabin door was the green water-grass stretching for miles, and the serene, wide expanse of sky.

The central gathering place was the pavilion, which could be reached by a long, wooden pier that creaked and swayed. Extending out in the other direction was the dock, which was large enough to hold dinner tables, barbeque pits, and tables for drinks. 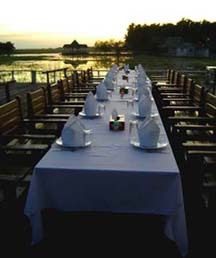 What a greeting we had as we stepped off the boat at sunset after our first boat ride. The staff had prepared the tables for our feast with white tablecloths. Before the darkness set in, they had lined the pier with candles and with the help of a few headlamps, torches, and lighters, we prepared for our evening feast.

Pancake didn't know it, but part of her surprise was to see us all in our craziest hats and wigs. And what a riot it was indeed to see Jeanie-Beanie in an afro, Uma Thurman as platinum blonde, and the Three Little Girls in colorful pigtails and feather ballerina headbands. And the punishment for those not

in costume? Silly String. Lots of it. All over the hair. The fact that it was flammable made the eyes of the token pyromaniacs gleam a little too brightly in the light of the candles. The funniest line of the day (next to Chief Pyromaniac's line, "So, whose birthday are we celebrating anyway?") was Uma's. When asked to look up into the night sky she said, "But if I look up at the stars, my wig will fall off!" Not something you expect a 27-year-old to be saying while camping on a Saturday night, mind you.

And the food. Oh. My. God. The. Food. Jacque O had orquestrated the event, and each of us brought 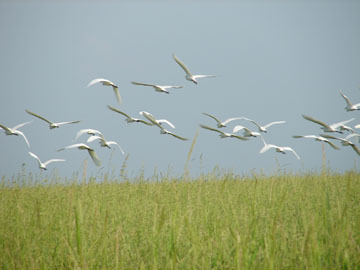 our assigned victuals. As for the pasta salad cook-off between Everest and me, I have to say that Everest won. I just couldn’t find good feta cheese anywhere in the country, and I had just hired a new cook, so what can I say?

Three grills were in full force: the fleshetarians had their chicken and steak and the three of us vegetarians had our grilled veggie-kabobs. (We won’t say who, but two of the three vegetarians became fleshetarians that night, claiming temporary insanity. They blamed it on the open fire pits, the stars, and the animalistic party fever that hit the tribe after the forth round of sangria.) Then the guitars came out, and Holey played his rendition of various songs, inserting his own, special lyrics, which had us all rolling on the deck laughing.

The next morning, Pancake prepared us all (in true style) pancakes. (Why is it that Pancake is 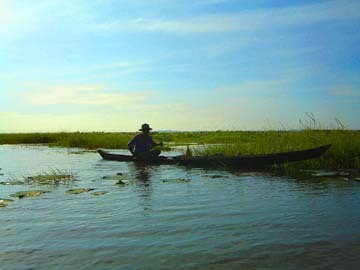 always the happiest when making pancakes for her friends? It’s a great sight, seeing her flipping away with a smile on her face.)  The Three Girls got have their favorite shapes: Mickey Mouse and Bird pancakes. We had to marvel at how Holey, who’s such a raucous, mischievous jokester, could manage to raise such lovely daughters. (We suppose it’s because of his lovely wife, but how did he manage to get such a lovely wife?) When we pressed him on the issue, he explained, “My girls are so well behaved because we used to have four children. We made an example out of one.” Everest and I had to agree that Holey made our festivities so much more fun; he had us all laughing, even at jokes we really shouldn't be laughing at!

After breakfast, we boarded the boats for our second jaunt out onto the water. This time, we were 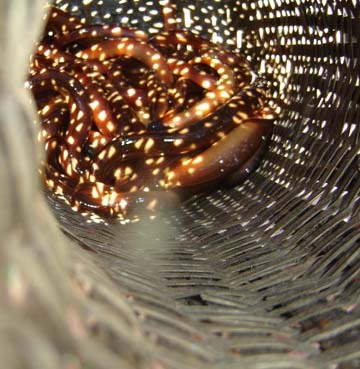 able to see a few more birds, fishermen, and baskets of eels. The eel traps are thin, bamboo baskets that are lowered into the water overnight and covered by grass. The eels get trapped inside, unable to escape. One fisherman allowed me to take this picture of the eels he had caught. It was hard to get a good picture, but if you see the shiny, slimy stuff in the bottom: those are eels. EEK!

We all came home a bit sunburned, extremely tired, but very content, indeed, to have been with friends out on the water in our boats and under the stars in our wigs.

I am in awe of your ability to capture the essence of the weeknd in words and photos! You are such a wonderful writer! What an excellent close to my birthday to have the weekend painted for me in words! Thanks!

What a wonderful weekend and a fabulous blog-testiment to the festivities-that-were. You have a great talent in recoding these events, thanks for sharing it - and a beautiful weekend, including rescuing me with a to-die-for cosmopolitan at a precarious BBQ moment - with us all. What to do about the imminent departure of Everest, for, well Everest, I just don't know... Happy Birthday Pancake, life just gets better.

What a wonderful time you describe so well... Brought back great memories of my time there two years ago. Your pancake breakfast is a great improvement to the one we had then. My best memory of the event was the absolute delight my driver expressed for the experience. How I miss you all.

P.S. Are there two Jacque's?? The one I know would not have had a cosmos.

Hi, pups! Yes, there are two Jacques. One's a real name, the other isn't. As you know, I use pseudonymns here at "shamash says".... Jacque O. is the pseudonym for someone else who looked quite like Jacqueline Kennedy Onasis (sp?) with her sunglasses, scarf, and hat at the helm of the boat as we glided throught the water.

for the record: the drivers had just as much fun as us this time,too!