« Trinity of Loves | Main | The Only Dream Worth Having »

Feathered Comanches, the White Monkey, and the Turtle Dance 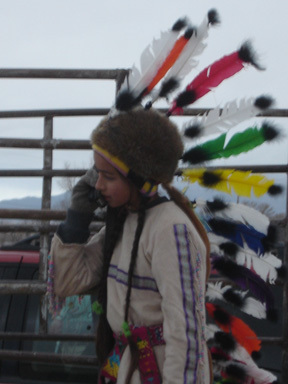 After dancing with her tribe, this young Comanche dancer takes a call on her cell phone.

This holiday season, I made my annual pilgrimage back to my favorite spot on the planet: 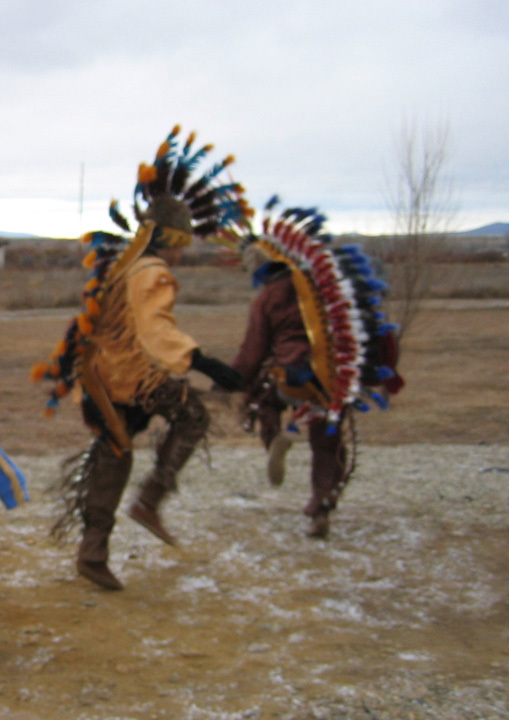 Not only is Taos full of visionaries who live in earthships and use solar energy, but it’s steeped in the ancient traditions of native American culture. This dusty, Northern New Mexico town is a collection of ironies: a trailer on a quarter of an acre lot sells for a quarter of a million dollars; you can eat the best chile relleno at Rita’s for a few bucks, and then, if you wish (and many don’t, mind you!) head to the resort Monte Sagrado where you can eat a yak burger while hanging out with the stars like Pierce Bronson. (He was staying there with his family for a few weeks while filming.) Where else can you shop at the grocery store and run into Julia Roberts AND your former student who bags her groceries? Where else can you drink chai at the Hanuman Neem Karoli Baba Ashram with Santa Fe lawyers, Hindi families from Denver and California, and dreadlocked hippies? In Taos, the real estate prices make it too expensive for the average Joe, or an idealistic school teacher like me, to live. But, the newspaper’s free, the news of scandals free, the second cup of coffee’s free, the chai is free, and so is the love.

After a pleasant New Year’s Eve of conversation and cranberry cocktails at Auntie Nan’s house with JP, The Starwatcher and Rainbow Heart, I was in bed before midnight since I had to arise before dawn, and Pirate had a full day planned.

New Year’s Day. 2006. The morning dawned cold and grey. Fresh in from my home in Southeast Asia, I was thankful for the down coat and woolen socks that Pirate had lent me. A hop into the Ford pickup, and we were off to see los Comanches dance. Before the sun rose we arrived at the Ranchos de Taos

church, the one that Georgia O’Keefe made famous in this painting. There, dancing Camanches were kicking up the New Mexico dust, whirling around in circles and chanting.

This New Year’s celebration goes back to the ancient traditions, as described in Enrique R Lamadrid’s book “Hermanitos Comanchitos: Indo-Hispano Rituals of Captivity and Redemption” (photographs by Miguel A. Gandert). One of the best parts of the book is the CD in the back: a recording of the Comanche dance songs. They are haunting, and I listen to them now, as I write.

Surprise of surprises, both Lamadrid and Gandert were at the dance, and Pirate and I were able to speak with them. (And oh, were we jealous when Gandert was able to hop on the back of the truck that transported the plumed Comanches from home to home.) A brief synopsis of this New Year’s ritual can also be found in “Nuevo Mexico Profundo: Rituals of an Indo-Hispano Homeland”, also by Lamadrid and Gandert:

To greet the first day of the New year, several groups of Hispano Comanche dancers gather in the shadow of the San Francisco de Asis church and begin a rigorous day of celebration. From sunrise to sunset, from house to house in the villages of Ranchos de Taos, Talpa, Llano Quemado, Cordillera, and Los Cordovas, Los Comanches sing to the beating of single-headed drums. Their children dance to honor Manuals and Manuelas, the namesakes of Emmanual, the Holy child, on this blessed day. In fanciful costumes of buckskin, flannel, fringe and feathers, they reenact the dramas of captivity and redemption to honor their genizaro heritage.” 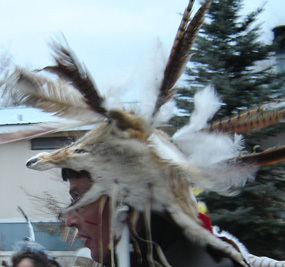 (This is a photo I took of one of the dancers, whose mask is that of a head of a fox.)

So off we went: a caravan of cars and pickups, following the dancers from house to house of those who house anyone with the name “Manuel” or “Manuela.” It was cold. I was freezing. But the warmth of this ancient tradition was contagious, and I find myself singing along with some of these Spanish songs- some of which are graced with the haunting poetry:

For I crave both debts form [sic] thee.

You shall have your shield most trusty

I shall have my sweet bread,

And that sprouted flour treat:

Marinated in a skillet

We shall make some fine preserves

Run away… to your captain make your wail.

If you have no real feelings,

Knock your head to no avail.

The costumes were beautiful. Between the dances, the Comanche leader, whose face we never saw, 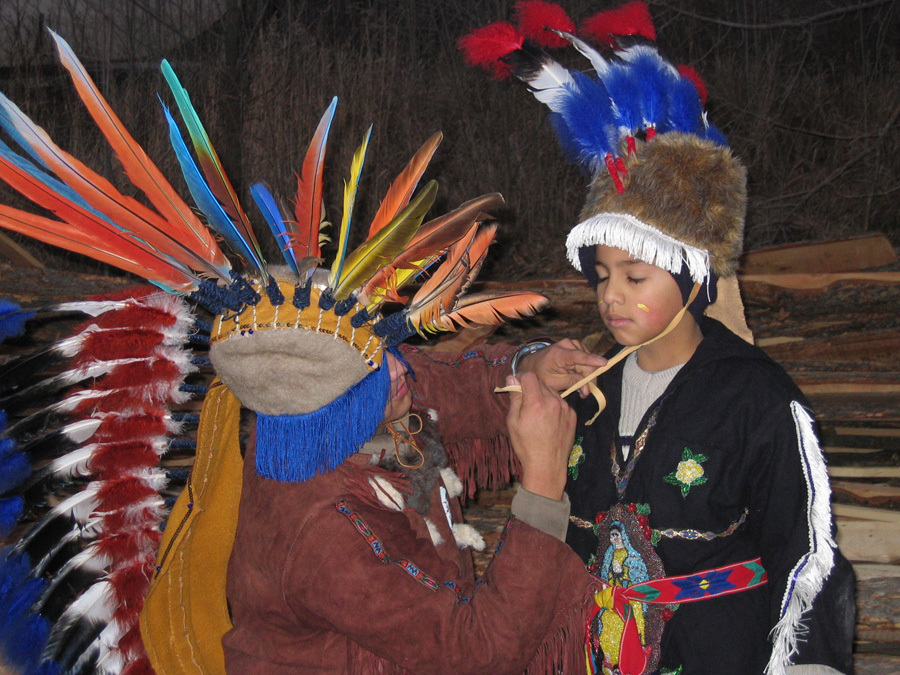 preened the feathers of his son.

After each dance, the dancers are invited into the homes of the visited and are served coffee and sweets, and for the singers and drummers: a shot or two of whiskey, if they liked. One of the drummers, JP, had been to Auntie Nan’s New Year’s Eve party the night before, and what a treat it was, indeed, to hear him in this ancient ritual. He no longer was the shy Hispano, speaking softly and humbly at a New Year’s Eve gathering. Now, he was a mighty drummer, participating in a ritual repeated for centuries each year, each New Year’s Day, come rain or shine. No matter what the weather, the Comanches dance. When it rains, they must remove their plumeros (feathers), but there they were, in their buckskins, dancing, their breath coming out in puffs, their eyes closed in something close to holiness, something close to rapture.

For two and a half hours, Pirate and I followed the caravan from house to house. We didn’t want to leave, but our fingers, ears, and noses were numb, and we were in sore need for a warm cup of coffee from The Bean. Also, we didn’t want to miss the New Year’s Turtle Dance at the Taos Pueblo, the oldest continuously inhabited town in North America. With our Bean coffee to go, we drove onto the Pueblo lands: a long expanse of land at the foot of the sacred Taos Mountain. I took no pictures, and neither did anyone else. A long line of shirtless men wearing pelts, moccasins, and feathers, chanted the ancient Turtle Dance songs: mournful, and somber. Standing there with their rattles and boughs of pine, shoulder to shoulder in front of the adobe town, the men were joining the Comanches in keeping the traditions alive. A young boy of 8 stood in line with his 70-year old grandfather, pony-tailed and stoic. I lit a candle at the San Geronimo church, not far from the dancers, thanking the Great Spirit for these misunderstood keepers of the land. If it weren’t for them, this land would be covered in strip malls and asphalt.

We were cold. We needed some chai. So, off we went to the Hanuman temple, where we sang a few chalisas, and caught up with friends we hadn’t seen for years. There’s nothing like the temple sunroom on a Sunday: drinking chai and listening to the harmonium played by She With the Posture of a Ballerina. The White Monkey, Hanuman, was still there, still looking out at the devotees with those clear, all-knowing eyes, and Neem Karoli Baba still has that goofy smile that says, “Just love one another.”

And it’s noon. And I’m full to the brim with the Great Spirit, Shiva, and God.

Time to head home. Time to sleep. Time to dream of a time when I can come back to live in this town, my favorite place on this blue-green, fragile planet that spins with the hopeful and hopeless, the kind and unkind, the enlightened and unenlightened.

May the Great Spirit bless them, one and all.

May all your dreams come true.

you are a great mystery, a real Pirate, a true traveler and a lover of this fragile earth,
i haven't figures up yet, how you manage to be living in Asia, and to travel ever so often...":-)
am i jealous? may be a little
any how it was a delight to read about your Indian adventure and to catch some of the colors and smell and habits of a foreign place (and to "feel" this place built up in front of my eyes little by little with your words, ) such as this Taos is to me.
i will try to look up for some of the music that you've mentioned of "Comanche dance songs".
i loved the photo from the back of the two boys dancing in the mud...

Hi, moon. Living in asia and traveling so much is possible because I am a teacher who travels during every holiday, even if it's a three-day weekend. I'm glad you liked the photos and my "travelogue."

I visit your blog often, and have wanted to comment, but I must be an "msn" member, which I am not. Your blog is always a treat (even if it always takes so much time to upload on this slow dial-up.) I love the mixture of graphics and insightful, provocative text. I esp. like the most recent Thomas Allen photos where books come alive.

Glad to hear Taos is still your favorite spot on Earth.