Because Dancing Shoes considers us VIP indeed, he grabbed my arm, marched me through the cameras on tripods, magazine photographers, and representatives from Revlon, and sat us down in the seats as if we were The Queens of Y. One minute later, the first model was coming onto the stage. I looked over at him, and felt like Carrie Bradshaw sitting with Samantha Jones.

The French are known for their fashion, so when this city’s L’Alliance Frances hosted a fashion show last night, Dancing Shoes and I welcomed the tickets that French Contessa gave us. Little did we know, the night had more in store than what we had planned. 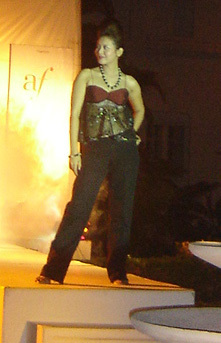 First of all, we arrived late. For 45 minutes, Dancing Shoes and I roamed the streets during traffic hour, trying to find the venue. I had been to the L’Alliance Frances during last year’s Carnival festivities, so I knew the general area. But, alas, I am horrible with directions, especially in the city at night. I had the wrong leg of the road, and we drove in circles. It’s tradition. Whenever D.S. and I drive somewhere, we get lost. Hopelessly lost.

“Should I get in the right lane or the left?” I ask Dancing Shoes. “Yes,” he responds. I reach over to slap his ragged-jeaned knee to knock some sense in that head of his. (Which reminds me of the famous night when we tried to find the bowling alley. At a “T” in the road, I ask him if I should turn left or right and he replied in frustration, gesturing with both hands to the curb ahead, “Just go straight!”)

But for what we lack in knowing directions, D.S. makes up for in a positive attitude and verve.

“Don’t worry, Shamash. We’ll get there,” he insists from under his Ray-Ban sunglasses, burnt velvet button-down, and paisley converse sneakers. “They can’t start the show without us, and we’ll get seats right in front. After all, I’m not this city’s version of Samantha Jones for nothing!” I looked over at him, and believe.

Just as we arrived, the show started. And up by the runway were two front-row seats labeled “VIP” in large, black capital letters. Because Dancing Shoes considers us VIP indeed, he grabbed my arm, marched me through the cameras on tripods, magazine photographers, and representatives from Revlon, and sat us down in the seats as if we were The Queens of Y. One minute later, the first model was coming onto the stage. I looked over at him, and felt like Carrie Bradshaw sitting with Samantha Jones. Only this ain’t no Manhattan, and this ain’t no “Sex and the City.” But, I pretended.

“This music has GOT to go!” D.S. complained. “Who organized this? This is appalling!” D.S. felt bad for the models (all of whom he knew well, modeling having once been his career), walking on high heals across the narrow runway to “The Macarena” and other sorts of overly-played songs from Y. nightclubs. “Can’t they be more original? This music is so yesterday!” (They really should put D.S. in charge. Really. He's not Samantha for nothing.)

Well, they tried to be original. During the intermission, European film shorts, many of which were over a decade old, were shown. Most of them reminded us both of bad karaoke videos ("But at least karoke doesn't pretend that its silliness is serious!" said D.S., loud enough for a very proper-looking row of French to hear.) One short was a bad quality film of overweight adults 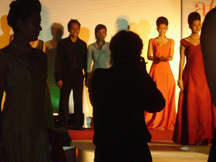 and bundled children iceskating in a rink, while an occasional still of a dress (minus a body) flickered and hovered in front of the screen (blocking the skaters, thank god!). The audience was restless. Children ran, crying, across the stage. But then, it got worse. Next in line was a 10-minute "short" of a pale-faced, heroine-addicted-looking figure swinging on a swing to heavy medal music. It only promised to be more interesting when the androgynous figure turned his/her back to the camera and crouched down, stretching those PVC trousers to their limit, swinging his/her arse into the camera.

Finally, the show started again and the models did a decent job. This is one of the most isolated capital cities in Asia, not Milan, not Paris, not New York. D.S. knows the little money they make as models here, so I had to admire their graceful style despite their low pay. “Good models don’t look at anyone,” said D.S. “They look into the distance, expressionless.” But some of them, knowing D.S. from his runway days, saw him in the front seat and smiled from the walkway. They were his friends, after all, and it was nice to see modeling colleagues greet each other, even if for a brief moment.

Afterwards, we mingled with some of the folk we knew, drank some purple-looking cool-aid drink, met some of the designers that D.S. knew, and then hopped into the car, searching for a place to eat.

And promptly got lost. Again.

But that's another story.