What Should I Name the Kitties?

It's all Dragon Queen's fault. Remember her? She's the one who shows up at your door with a handful of kittens 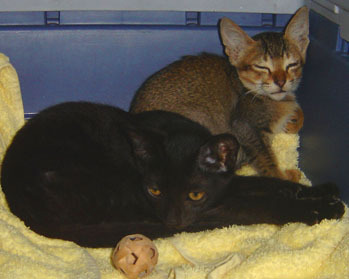 and says, "They need a home?" and before you know it, they're at home with you? She's just that way, Dragon Queen. The stray animals love her; street cats see her coming, and follow her home. Well, this time, it wasn't any different.

Heading down a one-way alley in downtown Y. the other day, DQ’s visiting father yelled “Kittens!” and before anyone could say “There’s more than one way to skin a cat”, the entire family was gathered around, looking at the litter. The shop owners, soon to move away, were desperate to find homes for the eight-week old kitties, and DQ knew that I was on the lookout for a couple. So, after school yesterday, she took me down to see the litter.

How to choose? Some of them were sleeping in a pile of five; others were scampering about and running out into traffic. How did they survive eight weeks? They were skinny and flea-bitten, and this 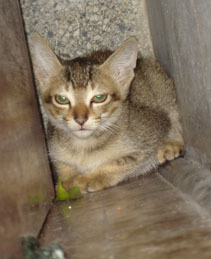 country is known for cat cuisine. (No, I’m not kidding. You won’t see a stray cat anywhere here, since they show up on dinner plates. Dogs, on the other hand, rule this city, running wild and feral through the streets in ferocious packs.) I finally settled on the sole black one, and a shy Abyssinian kitten, who could sleep in the palm of my hand.

And how bad did we feel in leaving the rest? DQ moped the whole way home, wanting to take them all home. I kept reminding her that she already had two cats and two dogs, so enough already.  No worries. Within 24 hours, DQ used her powers of persuasion to find homes for the rest of the litter. (Students will do ANYTHING for an “A” in DQ’s English class!)  :-)

So, they are at home. Aren’t they the cutest things EVER? They weigh less than a pound, and that ball that the black one is looking at is about the size of a small walnut.

DQ and I shampooed them, de-fleaed them, and fed them. And now: I’m stuck with a dilemma other than where to find a good vet to get them fixed, how to get rid of their worms, and how to stop their meowing: what to name them?

Oh they are gorgeous.

The one with the big ears looks like s/he walked right out of Egypt.

And black with golden eyes -- wonderful

Umm, Darth Vader has a nice ring to it...

Or maybe just Darth since it hasn't reached full size yet.

Then you can add the Vader when it preys on unsuspecting Rebel Forces...

KITTENSSSSSSSS!!!!!!! Babies, cuties, lil'sweeties... I wanna be a mama. Can I be their Bastetmother? Is there such a thing? As to names how about Chundra and Surya
(moon and Sun in Urdu I think though it might be Sanskrit). I am so happy for them and you. Congratulations!

I'd go with 'Boom Boom' for the black one and 'Lynx' but the Urdu/Sanskrit ones sound OK too.

And what have you thought of so far, Shamash?

I'm liking Darth, too, Micheal. But it doesn't fit his personality. This cat's too cuddley to be named Darth.

I've thought of "Taos" and "Gibraltar" (my two fav. places in the world), and Pirate has suggested Mac & Tosh, but I'm not a mac person. I've thought of Google and dot_com, just to be tech-y.

Though my two aquaintences Chundra and Surya would love to have kitties named after them, I'm not sure if those names fit either.

"Ja" means "tiger" in the language of this-country-which-shall-not-be-named, so I'm leaning towards that for the tiger cat, since she's a tiny tigress in so many ways.

As for the black cat: he's quite mystical; those eyes just pull you in. So, I'm leaning towards "Rumi", my favorite mystical poet.

We'll see, though. This weekend I'll decide for sure.

If they're competitive, you could go with Tesla and Edison.

Hey! Cuddley things can be named Darth! I resent/resemble that comment! ;)

Ok, so maybe something else might be prudent and not TOO techie (google was way nerdy there Shamash)...

Perhaps a Danish name could be used. Being a space science dork, I remember there is a famous guy named Tycho Brahe. How does the name Tycho ring to you?

You're right, Darth Vader: "Cuddley things can be named Darth!" I was thinking more on the lines of Star Wars, not a certain man in leather motorcycle gear who gives great hugs. :-)

Rumi and Ja: The Poet and the Tiger.

Gabby tought you should have named them 'Lucky' and 'Blessed' but in Bu*mese - since she knows they've hit paydirt. But she can condone Rumi & Ja.
Congrats on your furbabies!

Adorable kitties! Who knew a pair of kittens would raise so very many responses?! I like Rumi. Remember Nancy's Kabir (the Tonkinese)? I had Sushi & WonTon for 17 years, also Tonks. Saki says whatever names you give them will make music in their ears once you call them by their names. Enjoy them and their beautiful soft fur.