One of David T. Greenberg’s published books has sold over a quarter of a million copies. His 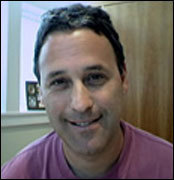 father, Jack Greenberg, was one of the attorneys who argued Brown v. Board of Education before the United States Supreme Court.

Add a few papaya daiquiris, a dollop of green tea leaf salad, and a splash of good advice on writing from someone who’s “been there”, mix together in the Monsoon, and presto! You’ve got the recipe for deliciously inspiring evening, or at the very least to answer to the question What Ever Happened to Humpty Dumpty?

David Greenberg, famed children’s author who is hailed by the New York Times as “our emerging poet of Gross” was in town this week giving writing workshops to students at our school. A dynamic

communicator who performs his poems for kids and then shows them how write their own poems, he was an inspiring guest to have on campus. As I left one of his workshops, I heard one of the elementary students saying, “I want to be a writer, too, when I grow up.”

Come to think of it, I’ve always wanted to be a writer, too, when I grow up.

So, in hopes of picking his brain about the publishing world and to get advice on where to go in my writing, I volunteered to take him to dinner to after one of his evening workshops. After he was finished signing autographs and posing for pictures, we climbed into my old Toyota truck, and headed downtown to the Monsoon for dinner. We ordered papaya daiquiris and I introduced him to le phet, which is green tea leaf salad served with lots of garlic, peanuts and other spices. New to this part of SE Asia, he was full of questions about the food, the people, and the “powers that be.” I filled him in the best I could, while making sure we sampled every appetizer on the menu.

Then our talk turned towards writing. Ironically, though I’ve lived the writing life and understand the how hard the solitary endeavor of “showing up at the page” is, I found it difficult to talk about my work. I stuttered and sputtered, finding it hard to put into words what I do. I find it hard to speak about that which I haven’t yet written. I have been writing for years, yet I haven’t yet sat down to write a proposal of where I want to go with my work. After listening attentively, he offered me a few suggestions:

That full moon evening, after dropping him off at his hotel, I drove home through the dark streets of this city Somewhere in Asia, thinking about my life and where it’s going.

Thinking about my passions and my dreams.

Thinking about persevering, even when it is, at times, the most difficult thing to do.

Inspiring post! Thanks for sharing your emerging wisdom, curiosity and joy.