Recipe for a Friday Night 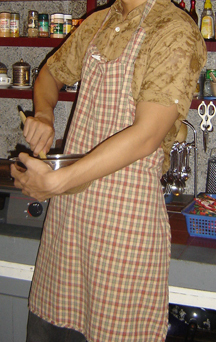 "Stay-at-home moms were out on the town at a high-priced fund-raiser while the young and single stayed home to bake cakes.

What’s going ON this town?"

A vegan recipe for a vegan Friday night. 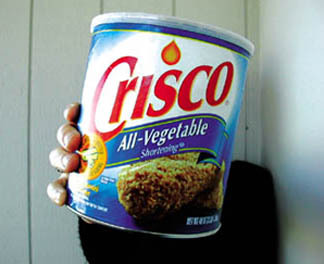 While bored and desperate housewives were out in their sparkles last night drinking caparenas and dancing Brazilian, I stayed home and taught Dancing Shoes how to bake a cake.

And, since I’ve been cooking for the last eight months on a two-burner gas stove [and since I just bought Uma Thurman’s oven in her departure (safe travels, Uma!)], I knew it was time to fill my kitchen with that comforting, homemade “What’s in the oven?” smell.

We had to chuckle as we looked at each other covered in flour, holding our Amarettos on ice, and DS in his apron. Stay-at-home moms were out on the town at a high-priced fund-raiser while the young and single stayed home to bake cakes. What’s going ON this town?

It wasn’t a planned thing. After cappuccinos at Café A., we came back to watch some film before heading out to the BC. Dancing Shoes and I are both film buffs, and he has this sometimes-annoying habit of watching favorite film scenes over and over. I’ve been know do to this, too (see this post),  but not to the extent that he does. On the list: the car/living room scene in Monster’s Ball right before Halle Berry  says to Billy Bob Thornton “Make me feel good”. And then (of course) there are certain scenes from Brokeback Mountain that we saw over the weekend at Romeo and Dressed in Black’s pad. This time, we put in one of our favorite films of all time, The Hours,  to watch the “Julianne Moore bakes a cake with her son” scene. And that did it. Dancing Shoes turned to me and said, “Shamash: let’s bake a cake!”

And so we did.

I taught him about Hershey’s cocoa, made in a Pennsylvania town not far from where I grew up. I told 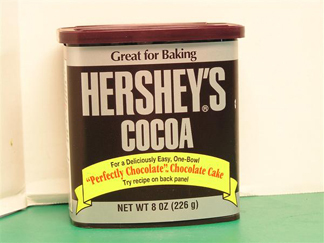 him stories of how the whole town of Hershey, Pennsylvania smells of chocolate and how, as you pass it on the highway, your mouth waters.

I taught him about the differences between Crisco and lard, and the importance of greasing and flouring the pan. I showed him the beauty of hot mitts and using a knife to level off the measuring cup, and how important it is to use a measuring spoon when adding baking soda. He was a good student, even when he said, “Can I stop stirring now?” After it was baked, we cut the warm cake, added frozen raspberries on top, poured ourselves glasses of milk, and put Gosford Park in the dvd player.

We almost spit out our cake in laughter at every line of Constance Trentham (played by Maggie Smith) in this timeless murder mystery set on a country estate in 1932 England:

Constance: I'm breaking in a new maid. I’m simply  worn out with it.

Actually, there’s nothing more exhausting, is there?

Well, dear Constance, there IS something more exhausting.

It's going to the BC and being hit with the sudden revelation that there are times in one's life when movie scenes are much, much more interesting than the scenes we see in real life.

P.S. Here's the cake recipe we used. I got it from my mom, who got it from The Mennonite Cookbook, which is out of print, I'm sad to say. I share this recipe because it’s one of the few vegan recipes that I can bring from my childhood. For every one of my birthdays, Mom made this, along with her homemade, cooked flour icing, cooled to perfection.

Bake at 350 degrees for approximately 32 minutes. Great for layer cake.

Posted at 12:36 AM in Entertainment, Ex-Pat Life, Film, Food and Drink | Permalink