Here in Y., you have to be a bit creative and make your own bit of fun.

Here's to making the best of a Sunday afternoon soccer game.

It was hard to believe that French Contessa would want to spend a Sunday afternoon at the soccer stadium watching a bunch of guys in uniform kick a ball, even if they were cute. She’s known for her predilection for lounging by the pool, shopping for fabric, or eating sushi. But Dutch Treat was in town, and since he’s a warrior on the soccer field by scoring goals left and right for the expat team, she dragged Dancing Shoes and me along for the ride.

And she had her convincing ways. First of all, she looked at us with those intense eyes with their hint of possibility and insisted,

Then she suggested that we make a picnic of it. She brought a nice bottle of chilled champagne and a bottle of wine. I brought fresh strawberries and whipped up a nice guacamole from veggies from the Chinese vegetable market. DS brought Japanese seaweed to wrap around the cheese. 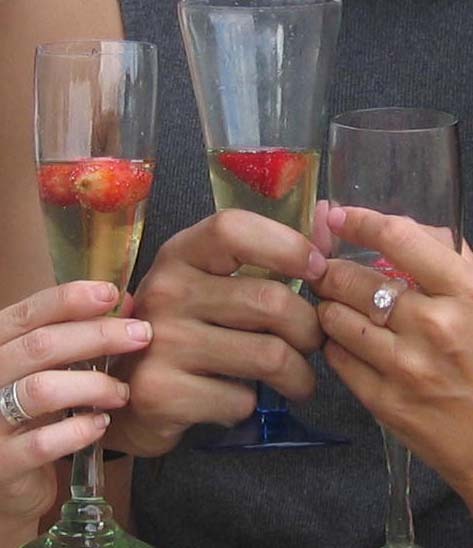 We were so intent on arranging our picnic and recording the event in digital photography, that we missed the goals that Dutch Treat scored. But, we cheered when he came off the field, and offered him a glass of champagne. Perhaps we were confusing Asian soccer with Wimbledon.

One of the best parts of the day wasn’t the “hot and sweaty meen”, but the entertaining direction the conversation took among some of the fans:

“I mean, when I look at Carrie Bradshaw, she has these rich and powerful boyfriends and she’s not so smart. She doesn’t talk about politics, and we're much less superficial than her, so we can find someone rich and powerful, too!"

So, she said her brother from Texas was coming to visit, and I love cowboys, so I asked her,

“Does he wear cowboy boots and speak in a Southern accent?” and she said no.

“Does he wear faded Levis and have a ponytail?” and she said no.

“Does he ride horses and live on a ranch?” and she said no.

So, (Shamash raises champagne glass in a toast) here’s to the Texans who fit the cowboy image (minus the “George W.” part) and here's to the absolute superficiality of finding someone rich and powerful, especially when you're already rich and powerful.

Here’s to French Contessa for making the best of a Sunday afternoon soccer game.

Hot sweaty soccer players, sounds good to me! Guys who look like GW- not so good!
I'm glad you're having fun!!!