« going postal: the things that you own | Main | Thirst »

Be the change you wish to see in the world 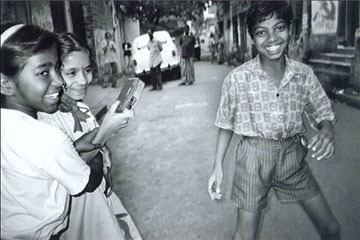 Photos by Zana and Avijit

Above my classroom whiteboard in colored letters, the quote “Be the change you wish to see in the world” by Gandhi spans the wall. The letters, cut out of construction paper, are six inches high, and laminated. Lately, though, I haven’t been thinking much about changing the world. I’ve been thinking about research papers, grading, my master's thesis, and the end-of-the-school-year wrap-up.

Not until last night, with the oppressive heat keeping so many of us in this country up until the wee hours of the night (and longing for the monsoon rains to begin), was I so deeply touched by a story that proved that living by this motto one can, indeed, make radical change possible. All it takes is a dream, a bit of integrity, compassion, and a deep love for all people. Photographer Zana Briski, director of Born into Brothels and founder of Kids with Cameras is my latest hero.

Last night I couldn’t sleep: the 95 degree temperatures had my plants wilting, my cats panting, and the insects droning around the florescent light in the driveway. There was no wind: just hot, heavy air stirred only by the ceiling fan. The restless kitties sat on the windowsill, looking out into the night. By midnight I still couldn’t sleep, so I trudged into the kitchen, poured myself a glass of cool water with a splash of fresh lime, and sat down to watch a documentary DVD that I bought back from the States.

If you haven’t seen Born into Brothels yet, be prepared to be changed when you do.

As the film jacket reads: “A tribute to the resiliency of childhood and the restorative power of art, 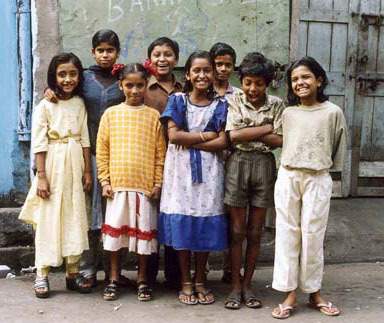 Born into Brothels is a portrait of several unforgettable children who live in Calcutta’s red light district, where their mothers work as prostitutes. Spurred by the kids’ fascination with her camera, Zana Briski, a New York-based photographer living in the brothels and documenting life there, decides to teach them photography. As they begin to look at and record their world through new eyes, the kids, who society refused to recognize, awaken for the fist time to their own talents and sense of worth. The filmmakers capture the way in which beauty can be found in even the seemingly bleakest and most hopeless of places, and how art and education can empower children to transform their lives.”

I think of the children here in this country Somewhere in Asia, and how their lives mirror those of the children in Calcutta. I think of children in red light districts all over Asia who are born into poverty, with little change to pursue their dreams. I cringed as I watched two nuns in the film tell Briski that they wouldn’t accept children of prostitutes into their institution. I think of Christ and the way he hung out with tax collectors and lepers and the adulterers: how revolutionary. I think of his words, “You who have not sinned throw the first stone” and “As much as you have done unto the least of these [children], my brothers, you have done it unto me.”

Briski credits Amachi and His Holiness the Dalai Lama as her inspiration, and uses (get this, you K.D. groupies out there!) Krishna Dass’ music as part of the soundtrack. (Gobala)

So, if any of you out there are looking for proof that small acts of courage can produce great change, rent or buy this documentary.

It will do more for your spirit than a good night’s sleep.

Don't know what to say but wanted you to know I am reading.