No, this isn't me. But it could be. All around my parents’ home here in rural 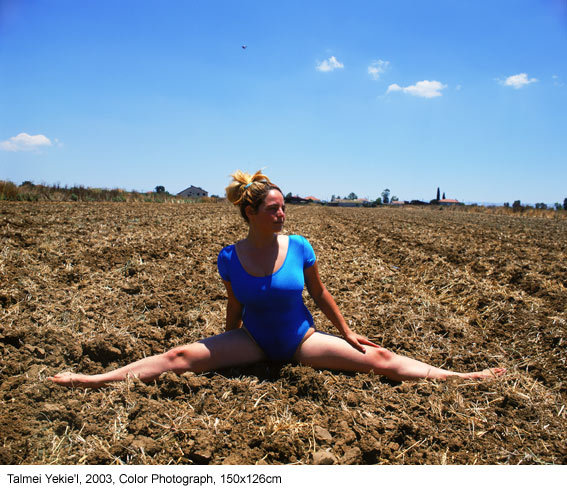 Image via Meirav Heiman: Talmei Yekiel, from the series "Split", 2003

planting. If I look out the window to the right, this is what I see (the field, that is: not the woman.) I’ve spent hours traversing the country roads. During my five-mile hikes, I pass Amish farmers with their 6-team horses, tilling the land.

They seem to know what direction to go, unlike me.

I am split in two.

Pappy died on the first day of spring this year. And now, the family is faced with a new season of its own.

Last week this time, I was at my grandfather's funeral, surrounded by my Mennonite aunts and uncles, and family friends, some who arrived on horse and buggy. (Yes, there’s a hitching post outside the church for horses!)

No musical instruments were used during the service: just four-part harmony sung by the caped-dressed and black-hat-ed men who already knew the hymns by heart, even without the hymnbooks. It’s Harrison Ford’s “The Witness” in replay, except these are my relatives. And I love them. Uncle Joseph, who looks just like Pappy: ruddy and jolly, a Santa Claus, only better. And Uncle Luke, who should have been dead with cancer years ago, but still walks and sings and tells stories as if he were in perfect health. Aunt Dee, with her constant smile and tiny, tornado ways, and Aunt Glee: remember when I wrote about her? She’s so cute, robust, short and happy, like a weeble-wobble, and I think to myself, “I want to be that content with life when I’m her age.”

I stood up at the church pulpit when spoke at the funeral, remembering Pappy and his love for railroads and family genealogy. None of the family but him understands my “travel bug”; he traveled (as a young man) on his motorcycle to Florida help in the orange groves, so I like to think I inherited my traveling genes from him. On a map, he always circled the spot I lived, no matter what continent, what country, what city. Beside it, he wrote, “Shamash.” He always asked inquisitive, thoughtful questions about my work and the culture of my host country.

My sister and I created quite a scandal- the first females in the county to act as pallbearers: helping to carry my grandfather's coffin from the hearse to the grave. My Italian leather heels groaned (my Pappy was not a skinny man!) Behind us, the kinfolk gasped: "Women pallbearers? What will happen next?" I suspect that all across the county there will be pictures of my sister and I on the walls of country churches: "If you see these women, shun them. They were PALLBEARERS!!" But, we were his only grandchildren (my mom is an only child), and we wanted to help. It felt right, somehow.

There is sadness in the house with Pappy’s passing, but I know he’d laugh as the “shun the sisters” scenario, and he’d love that my heels dug into the cemetery earth. He’d want that sort of clinging; that sort of hanging on, if only to keep me here in Pennsylvania a bit longer.

My family is faced with the difficult decision about what to do concerning the care of my aging grandmother who needs round-the-clock care. My grandfather, though aging, was her primary support. They were married for 62 years.  Now, she’s living with my parents, and resists returning to her home where she spent so many of her twilight years with Pappy. She has her morning cry, realizing that he’s no longer here. The rest of the day, she sits and looks out the window.

Should I come home to take care of her? The question has been echoing in thoughts all week; I awake each morning, wondering what I should do.

I am split, torn between my career and my family responsibilities.

I cannot imagine a stranger bathing my dignified, stoic grandmother: the one who worked in factories during WWII, driving forklifts. The one who rode roller coasters over and over at Hershey Park.  The one who rebelled, in her own, sassy way, against the conservative relatives of her spouse. The one who looks like Queen Elizabeth, and carries herself with such regal bearing. To look at her, her 90-pound figure is that of a porcelain doll, her hair piled high on her head, her blue eyes clear. She can no longer read or sign her name. She can no longer drive or bathe herself or brush her teeth. She cannot cook for herself. She can slowly, with a trembling hand, raise a spoon to her lips. The way she says “I don’t want this” is to take the plate of food and place it to her left. She likes looking at pictures in the magazines.

If she doesn’t like the orange juice, she’ll scrunch up her face as if she’s just eaten something sour. In her own way, she communicates.

She is beautiful. And her face lights up when she sees me. And she smiles at me, and her occasional laugh reminds me of brighter, younger days. Some days she’ll use words like “evidently” or “recently”, and make a complete sentence. Other days, she speaks like a toddler.

Pappy’s buried in the ground.

Grandma is still here, as if in a dream. Not a ghost, per se. More like a sort of star that twinkles occasionally, reminding us all of that great mystery of identity; of thought; of prayer, and dreams. She’s still half-here.

I love this! I'd write more but have a nursing boy on the lap. I'm torn too.

Words fail me, it made me think of my Grandparents who are old in body but forever 20 in mind, wanting to do all things and frustrated because they can't. Thanks

I know, morris, what you mean. I can't imagine what it must be like for my grandmother to not be able to do things that she wants to do.

It is so difficult to watch.