« Found Art: In Praise of Trash | Main | Powerful Beyond Measure » The highest open air bar in the Asia Pacific, The Moon Bar at the Banyan Tree Hotel is just the place to be at sunset, and the perfect place to watch the full moon rise over the humming, electric grid of Bangkok. It's almost as good as watching the Liverpool-West Ham soccer (... um... er.... football) match. I have the shirt to prove it. 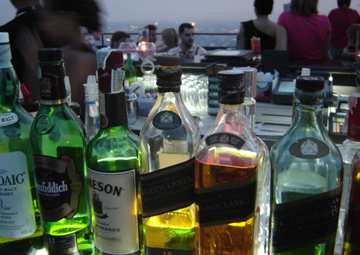 Over 50 floors up, it stretches into the sky as high as The Sky Bar. There’s nothing like drinking a G &T made with Bombay Sapphire while gazing out over the city like some sort of empress over her kingdom. What is it about height that makes one feel not only exhilarated, but –somehow- royal? What a treat to meet a cute Australian  there on business, and speak Spanish with a woman from Madrid. The Moon Bar is an expat hang-out, but it’s a quiet ex-pat crowd who gathers there, not the wild and crazies who head to the Sky Bar on full moons. (God KNOWS we wouldn’t want to hang out with THEM! :-)

Then it was time to appease Old Enough to Know Better by joining him to watch the Liverpool-West Ham soccer match (a.k.a. football match as he is training me to say.) We had the shirts (bought on Soi 7 for a few bucks each), we had the take-in food, and we had the good ole’ fan spirit to cheer the red team. We were not disappointed. Did anyone else out there watch the game?  What about those penalty shots? Seems everyone in Thailand was watching: the taxi drivers talked about it, the bartenders, the street venders. Old Enough to Know Better taught me about that funny little rule called “out-side” or “side-off” or was it “off-side”? I’m glad he explained; otherwise, when I get to the UK this summer and head to the pubs to watch the World Cup finals, I’ll need to know that sometimes (due to the off-side rule), even if a team makes a goal, that doesn’t necessarily mean that they earn a point.

And now I’m home, back in my country, with my feet on the ground, rather than high on bar stool of one of the tallest buildings in Bangkok. Tomorrow I’ll wear my Gerrard soccer shirt to school in honor of that penalty shot, and to celebrate the last week of classes before exams.

Dreams of full moons, flight, and the pounding cleats of England dance in my head.

Posted at 11:59 AM in Ex-Pat Life, Food and Drink, Sports, Travel | Permalink

...too bad wouldn´t share this. Went to Sirocco, thinking of a night to remember!