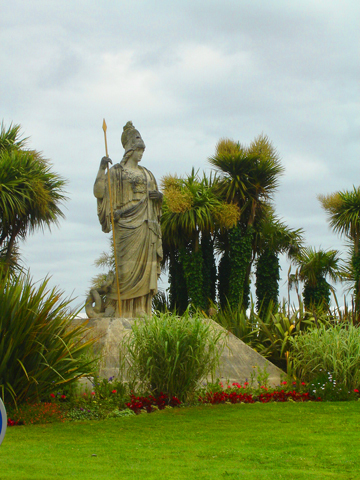 “A day in France is just the thing you need,” said Sir Edward of Portsmouth. So, taking his kind advice, Ash and I hopped aboard the Cherbourg Express on the Brittany Ferry across the English Channel. Little did we know that a $20 roundtrip ferry ride would end up costing us close to $200 dollars each, and an unexpected overnight stay in a seedy hotel with condoms in the welcome kit.

The day started at 5:50 am with the sound of the alarm clock. Ash and I were up at the crack of 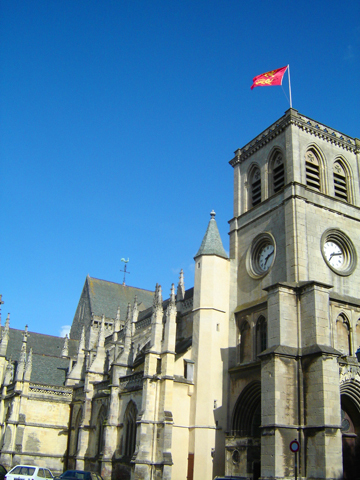 dawn on this longest day of the year- both figuratively and literally. Had we known what the day had in store, we might have turned off the alarm and stayed in the good, ole’ U.K. eating scones with a spot of tea.

The view from the harbor was grand as we departed Plymouth aboard the Brittany Ferry. We were traveling as day foot-passengers (no car), and in the bowels of this lumbering craft, a hundred or so cars were stowed away, out of sight, while the drivers drank Evian water and coffee, snacking on baguettes.

The day was sunny and innocently calm, but trouble was lurking. Unbeknownst to us, a storm had crossed The Channel the night before, bringing strong winds all across southern England. By the time land was behind us and we could see nothing but water for 360 degrees, the waves lurched us back a forth like a hammock on speed. It was difficult to walk without hanging onto the railing, and children were keeling over, sea-sick, while their parents carried them to the back of the ferry where the movement was presumably less intense. Ash started turning gray, and managed to make use of a “sac mal de mer” (seas-sickness bag) before selling her soul (and almost her body!) for an emergency dose of Dramamine from the crewman (England has its own Devil and Daniel Webster, believe you me, dear Yanks.) 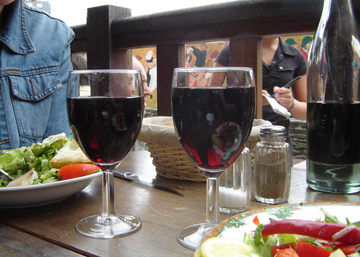 After three long hours, we docked in Cherbourg, France. Upon disembarking, I asked a local dock worker what time it was, and he said “11:00 am”- same time as England. No need to set our watches. Or so we thought.

So off we set to find ourselves some lunch and a good glass of wine. We chanced upon a sidewalk café, where we ordered salad and a half carafe of merlot, making a toast to the joys of walking on land. It was my first glass of wine on French soil. It tasted even better than that 1966 California wine that I once drank before riding across the Arizona desert in the backseat of a red 1966 Mustang convertible with the top down, but that’s another story for another time.

I was in France. Finally. And it felt good. 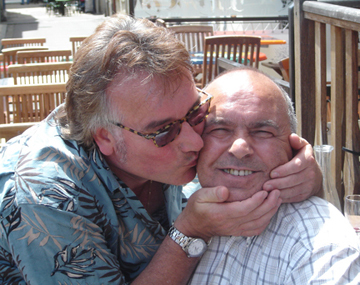 “I thought I’d feel a little more bitchy once my feet hit this country,” I said to Ash I also tried to work on my pout, but it only made me look like someone had punched me in the lower lip.

At the table next to us, two Italian men on a short holiday from their families to visit the beaches of Normandy were discussing, in Italian, life and women and family. I’m sure they got an earful of OUR conversation, too, because we came to find out that both Mauricio and Nino have lived in the UK most of their lives, and understood every word we had said. Perhaps that’s why they offered us some wine. Come to find out that we’re all expats: Mauricio from Sicily and Nino from Naples live in the U.K. while My P. and I live in Abu 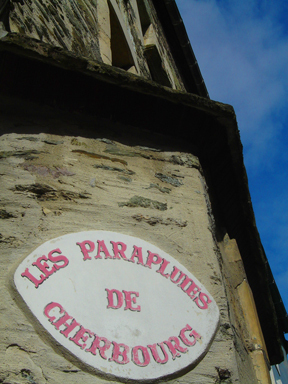 Dhabi and That Country That Shall Not Be Named. Expats have a common identity, it seems. For various reasons, we love and hate the country in which we hold our citizenship while we love and hate the county in which we reside. We expats live with this ambivalence that forces us to see that not all is black and white, and that every country, every nation, has a little bit of good and a little bit of evil mixed in the batch.

Hanging out with M and N ended up being one of the most enjoyable parts of our time in Cherbourg, next to good pizza, good coffee at outdoor cafes,  excellent shoe shops, and Ash being able to handle a trio of Russian Wolf Hounds at the terminal. Watching her with those beauties made me think that perhaps she should change careers 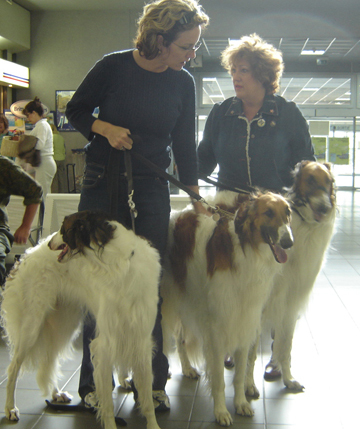 and consider working with animals. While I’m looking up at the gargoyles on cathedrals and staring at how the reflective light in a shop window would make a great photo, she can spot a cute dog three blocks away.

Things started to turn sour, though, come 7:00 pm when we returned to the ferry for the 8:00 departure. Walking into the terminal, we noticed that the clock read 8:00, while our watches read 7:00. The ferry to Portsmouth had already left. We’d missed the boat, and would have to stay overnight in Cherbourg.