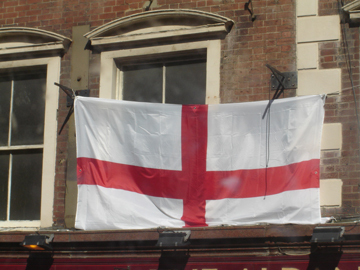 This English teacher/computer geek who writes poetry in her free time is starting to like football. Put a small-town gal from the corn fields of America in the streets of Europe, and strange things happen.

I’ve never seen anything like it. All over England, St. George’s flags are a-flyin’ from rooftops, windows, car aerials, and bikes. Everywhere you turn, the Brits are showing their support for their team in the FIFA World Cup Finals. So, when I saw the following, I had to laugh.

This is a bar in Chichester. Yes. A bar. Look closely at the sign near the door. If you can’t read it, look 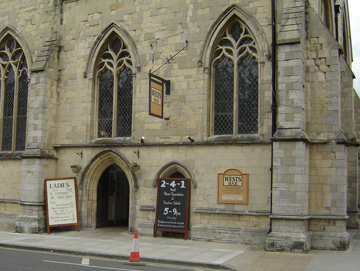 below for a close-up.

There’s no other sign like this in England, believe me. I took a picture of it because it’s an anomaly- something from another planet, a relic in remembrance of a world long past- a world before football- a world before FIFA and dinosaurs. We walked into this bar, just to see if anyone was in there. The place was empty except for a few old farts trying to pick up on a stray lady who fancied a drink without listening to football mania on TV.

Fact is, if you’re anywhere in Europe 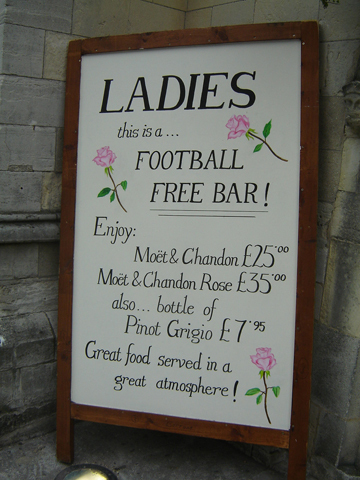 and you don’t like football, then go find a cave to live in until the World Cup has been won. By England, of course. Ms Sicily claims that the Italians weren’t aggressive during the USA vs. Italy game. She obviously didn’t have her glasses on to see all that blood! Where WERE her glasses, one wonders, because that was one sad show of bad sportsmanship. Another Italian-born friend apologized on behalf of his country for that elbow jab to the eye a USA player, covering the player’s face of in blood. And as for the England vs. Sweden game: how about those last 30 seconds? What kind of God to the Swedes worship?  I must find out, and then promptly convert.

I must admit that due to Naga’s patient tutelage (see here), this English teacher/computer geek who writes poetry in her free time is starting to like football. Put a small-town gal from the corn fields of America in the streets of Europe, and strange things happen.

hey shamash! I got back yesterday to the UK just in time to see England playing the semi-final today!as for the italy-US game, what I meant to say is that the americans were overall more aggressive, but believe me in Italy everyone crucified De Rossi- the italian player who purposely hit the American one- for what he did! anyways, I love watching 22 fit and generally quite nicelooking guys sweating to chase a ball, and you must admit that at the games there are always more chances to meet new guys ;)
big kiss
x

Hey, Ms. Sicily! Glad to see that you're back safe and sound! I wrote the above mainly because I wanted to use the phrase "where were her glasses?", knowing that you and only you would understand the story behind it. Oh, the beauty of multi-tasking!!!!!! ;-)