« She Will Kill Mice | Main | In Praise of the Bad Metaphor »

There Are No Real Goodbyes 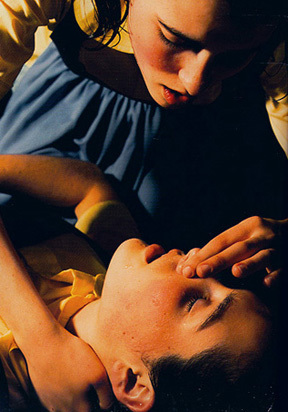 “I think if you have a meaningful experience with someone else, a true communication, they are with you forever in a way. We are all a part of each other in ways we'll never know.”

– from the film Before Sunrise

Expat life is a life of change. The connections made with people while living abroad are generally deep and meaningful, yet the winds move us on to other lands, other jobs, other friends, and it becomes exhausting, at times, to keep up with everyone.

I still write, however, to some people who I haven’t seen for decades. I am in email contact with a woman I met in Bolivia for one evening nine years ago. Then there are the people who I don’t hear from for years, who suddenly show up at the doorstep. It takes two seconds to realize that time hasn’t passed at all; we pick up right where we left off. More often then not, a person is in my life for a week, a month, a few months, a year (if I’m lucky!) and then they (or I) move on to another country, another job in another land.

I have been deeply affected momentary connections and meaningful conversations I’ve had with strangers on planes, at pubs, or in airport waiting lounges. I’ve spoken with a married man who is still in love with his high school sweetheart, the one he hasn’t seen for three decades. I’ve spoken with a mother who regrets having so many children, even though she loves them all. I’ve spoken with a young Russian who longs to travel in the circus, but who is instead studying for his MBA. There’s a raw beauty in the honesty between strangers. And, as Bryce Courtenay writes in The Power of One:

Sometimes the slightest of things change the directions of our lives, the merest breath of a circumstance, a random moment that connects like a meteorite striking the earth. Lives have swiveled and changed direction on the strength of a chance remark.
~ Peekay

We never know how our words – our chance remarks- might affect another, even a stranger.

Perhaps we can afford to be the most honest with those who haven’t known us since childhood. Perhaps, with strangers, we can tell the truth since we have nothing to lose. We risk nothing in telling our secrets to the bus passenger, the bartender in a strange town, the nurse in the foreign hospital.  We can tell the truth, because we won’t be chastised.

Burned in my memory still is a conversation I had when I was in my early twenties on a flight from Chicago to Houston. Beside me sat a 60-year-old Japanese medical doctor. His wife, the love of his life, was dying in the best hospital in the world, and he couldn’t save her. His career was dedicated to prolonging life, yet he couldn’t save the one person in the world he loved the most. Seeing that I reading C.S. Lewis’ Mere Christianity, he asked me about the book. We talked about faith and science, healing and death, karma and heaven. He longed for faith- something beyond his studies of deteriorating DNA, the effects of gravity, the cancer cells under the microscope, and the depleting ozone layer and its effects on the human body. He was fascinated by the simplicity of my faith, my conviction that some things can not be explained (or measured) by science, and my belief that the soul lives on after death. I, in turn, was fascinated by his life of measurement, calibration, and formulas: the way his life was explained by numbers and proof and carefully studied data. I was intrigued by the control he seemed to have over the events of his life: his belief that he could somehow save his wife by a new medicine, a scientific solution. Hearing him talk, I wanted to believe he could save her, if only for a while longer. I suffered with him.

It was one hour long.

I never saw him again.

From Before Sunrise:
Jesse:
Why do we think that relationships are supposed to last forever anyway, and that anything less is a failure?
(a beat)
But I hate the thought that we're just these ships passing in the night. I think the only time I get depressed is when I feel that life is just this series of momentary connections. I mean, of all the people you've ever known, how many of them are still in your life in any way? What happened to all the people you grew up with? Miss Van Sickle, my bus driver in the first grade- what's she up to? What kind of life is she having?

A wandering violin player has entered the room and is playing a waltz.

Celine:
But for some people, there are no real goodbyes. I think if you have a meaningful experience with someone else, a true communication, they are with you forever in a way. We are all a part of each other in ways we'll never know.

The elderly Japanese doctor I spoke with for an hour on the plane is still a part of my life in ways he will never know.

Here’s to the beauty of these types of connections: the realization even on a ship full of strangers, we are not alone in the world.

Here’s to realizing that strangers aren’t that “strange” at all, but rather a part of the great web of humanity: extensions of our selves.

I raise my glass in a special toast to those who help us to understand who we are, to the strangers who become our friends, and to whom “there are no real good-byes.”

Here’s to that reminder that we are all part of each other, even when we have to go our separate ways.

Interesting topic to write about. As you are well aware, I am in the midst in the moving process that you speak of. My kids are sad that I am leaving and it hurts when they use the word "abandon" because they are just as much a part of me as I am a part of them.

Needless to say, I am struggling with this move. I long for a time and place in my life when I can stop saying goodbye and put down roots. But yet, I still wander about the world - searching for a place to put those roots.

I get comfort in your entry cuz I know that I'm one of those people who has passed into your world. I know that wherever I go in the world, Shamash will be thinking of me... :)

Darth: Let it be known: you are unforgettable.

Happy trails, and see you soon!

this is a beautiful post and I symphatize with what you say. The other day I took my first exam and afterwards I was waiting exausted for my friends near piccadilly. sitting next to me there was a homeless who was clearly drunk. He asked me for a lighter and we begun to speak. Then he told me something beautiful, that will probably stay with me longer than all the anthropological theories I had studied for that exam: "when you loose you hearth, you loose everything". People sometimes dont realize it, but they can open your eyes about things that are so simple and yet so easily forgotten....

Wow. What a great story of how someone- a stranger in a city who asks you for a light- can remind us of the essentials of life.

Sometimes I wonder: what's the use of all this study - books, theories, literary journal articles- when all that really matters is your health, and to love and be loved?

Cheers, and lunch at Russell Square on Wed?

Hugs, and see you soon.