« Forgetfulness: Amazing Animated Poetry | Main | Waiting for My Soul to Catch Up with My Body »

Did I Just Have Coffee with Banksy

You might have heard about the controversy. So, when Paco introduced me to a creative Bristolian who claimed not to know who the famous Banksy was, I grew suspicious.

image via wooster collective: a celebration of street art

I've been following Banksy's work for quite some time. He has a large internet following, and I once posted about him here. Banksy has been successful at keeping his identity secret, and since I've been in the U.K. for the past six weeks, I've following his work in the newspapers.

So, when Paco introduced me to a friendly, creative man from Bristol, I jokingly said,

"So, are you the mysterious Banksy?"  His face was stone.

"No, I haven't heard of him," he said, avoiding my eyes. He was helping two artists with their project, and was doing a pretty good job it, if I must say so myself.

"You haven't HEARD of him?" I asked, incredulous.

"No, never." He was still avoiding my eyes, a gesture that was incongruent with his gregarious, out-going demeanor. Over the course of the next several days, I kept an eye one him as he maneuveured his way among the social circles of the Jazz Bar. He seems to know everyone, and when I accidentally called him Banksy in a public place, he shushed me, with a dagger look that could have killed me if I hadn't been wearing my "Hand of Fatima" pendant. I tried to find out more about him when he made mojitos for Paco and I. But, even when he's a bit tipsy, he reveals little. 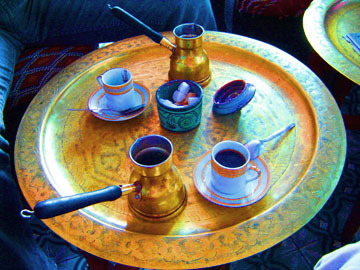 This morning, he invited me for coffee at a local Moroccan restaurant, and I got the scoop on his life.

I checked out the films at his website, and by George, I just can't tell.

Regardless, the coffee and the company was good.

And let's face it: I want his identity to remain secret as much as anyone else.

interesting, though hardly conclusive evidence. And I think it is Banksy, not Bansky.

Hi, Michiel. Thanks for the spelling correction. Some of us are official dyslexics- I made the changes.

And of course it's not conclusive evidence.

Hello Dear,
I too found our little coffee morning to be most pleasurable. In way of thanking you for not disclosing my current alter ego, I am planning a special little something that you may see in the papers soon; I call it Basil and I dedicate it to you xx

Water her well, and put her in a bigger pot so she grows even greener than she is already.

cheers, bloke/mate/chap, and keep up the good work! :-)

Did your Banksy look anything like the guy in the pics at the link below?

These are allegedly photos of Banksy with Damon Albarn of Blur/Gorillaz fame (Banksy did Blur's "Think Tank" CD cover).

The geocities link is so bogus!
Though geocities is "access denied" in the city where I live, I'm now in Bangkok and can finally access it.

Look at the pipe on the wall, the window, and the garage/windowfront barrier.

These are two different buildings, and two different storefrones. Also: look at the graffitti! What bogus "proof" of Banksy's identity!

I have a gut feeling that banksy is Damon Albran from blur and gorillaz ...i could be wrong i dont have much to back it but i really think so...what do yall think