Kiddush in the Suk 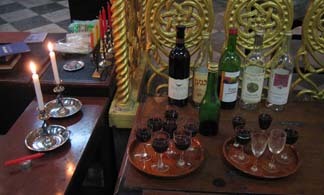 Buddha Bar gave way to the chanting of ancient Hebrew text. Matches were lit for Shabbat candles instead of clove cigarettes. The wine I drank wasn’t French. It was blessed. And kosher. 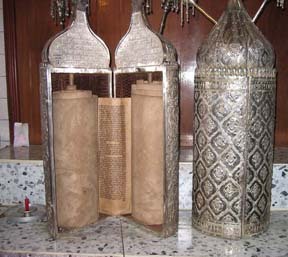 I was smiling my way into a Friday night Shabbat, a small, social gathering of tourist Jews who had come to the 150-year old synagogue in this city Somewhere in Asia. Searching for what they could probably find at home, these seekers, I suspect, seldom attend their local synagogues. One man from Venice Beach was more into Buddhist philosophy and sitting meditation than saying prayers, but I didn’t mind since he shared a few vanilla-flavored Tootsie Rolls from his stash.

Within a few city blocks of this synagogue in this city Somewhere in Asia, one can visit a Kali Temple, a Muslim mosque, a Chinese temple, and an Anglican Church. Looking at the map, I have to marvel at how so many religions have built their houses of worship in such close proximity and how the worshippers are able to live in such relative peace. As a matter of fact, the synagogue is located on one of the busy merchant streets, surrounded by blocks of businesses and apartments owned by devout Muslims.

Made of animal hide, all five books of the Torah are written on a single, stitched sheet. I was drawn to touch the scrolled parchment, but thankfully refrained. Pirate explained that a metal pointer is used by the rabbi to keep place as he reads, since no finger is to touch the parchment. The hand-lettered calligraphy is a work of art, a remembrance of a time before computer screens and laser printers. Pirate, looking oh-so-cute in his rainbow-colored yarmulke, knew the prayers by heart, while I silently 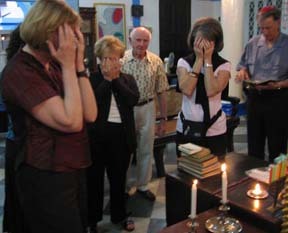 joined the women as they covered their faces for a prayer after the candles were lit. (Oh, the memories of Shabbat on the mountain, dear Lama Beans.)

The synagogue is a strange place for me to spend a Friday evening right before I headed off to happy hour at the S. where I met up with French Contessa and Power Suit. It’s even stranger that the same voice I used to utter ancient prayers would be used, in a few hour’s time and a few beers later, to sing karaoke songs such as “Bridge over Troubled Waters” and Frank Sinatra’s “My Way”.

The secular and the divine touch fingers so casually in this city. Often viewed as a god-forsaken and backward, this town is evolving in its own way, much like a wide and silently moving river whose strength moves, unseen, beneath the surface. Once again I’m reminded of how we’re all connected, if not by faith or prayers or a similar religious upbringing, then by the simple joy of listening to writings of an ancient desert people and honoring a shared Tootsie Roll eaten in true, tropical  reverence as if it were warm challah.