The Year of the Pig

Try buying a piglet and then finding a red dress to fit. 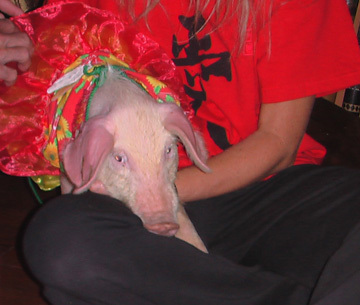 Try burning paper money and trying NOT to free the caged sparrows.

Here in this country “Somewhere in Asia”, this Chinese New Year was celebrated in grand style:

Dragon-chasing, litchi martinis, Chinese dumplings, and the robe of an emperor.

It began as a joke.

Last Chinese New Year (the Year of the Dog), Dragon Queen offered Squawk a puppy. It was a dog from hell, but Squawk kept it.

This year, we decided to offer her a piglet. With help from our longi-ed friends, we found a 45-day-old white pig, cleaned her up, and gave her a dress and a cute little leash. Little did we know that the pig was a squealer: try transporting a squealing male pig via car to your friend’s house. 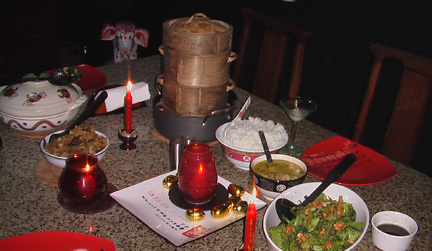 Squawk didn’t find the joke so funny, but that’s because she didn’t know we had rented the pig for the evening, and that she wouldn’t have to take it home. In the end, there’s nothing that a few litchi martinis won’t solve, or a dinner table that looks like this.

My wife and I would totally dig litchi martinis,do you have a recipe?

Chill vodka; pour in shaker with ice.
Pour in litchi juice to taste.
Shake.
Pour into martini glass.
Spear the litchi hearts (the "eyeball" as we call them) with a toothpick and drop into glass.

Try it. If you like it I'll send you my Mango Margarita recipe, which is even MORE complicated, requiring hours of labor.
;-)

I would imagine the quality would decrease after a few tries.... or maybe no cares by then.

Tonight should be fun..... pan fried dumplings (with linguica), bulgolgi-style flank steak, bok choy, and litchi martinis (thanks to you).