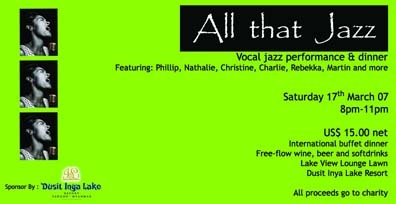 I’ve always wanted to sing in a band. After all, it's one of my 43things. Last night, I made it happen.

The vocal jazz performance was part of a fundraiser for a local charity to promote literacy. The setting was magnificent: a jazz club with floor-to-ceiling windows that looked out onto the water. Tiny white lights sparkled in the trees, a much-needed cool breeze blew in from the lake, and speakers were set up for 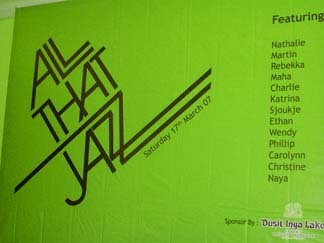 those who sat outside. I chose to sing "Comes Love" (a Billie Holiday song) and "All that Jazz". I, along with a group of other brave souls such as Dancing Shoes, French Contesa, and Power Suit, sang for the event. Luckily, we were accompanied by the best band in the country: The Spectrum.

Before the performance I was so nervous I couldn't eat, my stomach was full of a flock of butterflies, and at the rehearsal, my hands were shaking as if I had Parkinson’s disease. But some sort of cold, icy calm came over me when I was in front of the crowd of almost 200 people. I think the two shots of vodka that GQ gave me might have helped me to be brave and to belt out the lyrics, “Comes a nightmare, you can always stay awake/ Comes depression, you may get another break/ Comes love / nothing can be done.” (Over a few glasses of wine, Power Suit and I were recently talking about this subject: we can't control who we fall in love with. It either happens, or it doesn't, and when it does, there's nothing to be done!)

It helped to have so many friends like Sparrow, Black Rose, Bo Bo and Frida Kahlo in the audience lending their support. I’ll never forget how glam Power Suit looked in her 1940’s vintage dress with fishnet stockings, and the sultry French Contesa in her sexy, black bustier singing a jazz song in French. GQ, looking oh-so-Tom-Ford in that "casual suit" look, sang so well we had to wonder: why isn't he on Broadway? And as for Dancing Shoes: during his show-stopper, he hit that high note as if he were on American Idol.

I never would have done it if it weren't for 43things. There's something to be said for setting intention: if you put it out there, it just might happen!

I miss you ... and I miss all the things that we used to do.

But you know what???

DS-
It won't be long!!!
I can't WAIT to see you!
I get all teary just thinking about it!