« She's Hot, He's Not | Main | Poetry Collections: May Not Have But Certainly Must »

Soaked to the Skin: Water Festival reveler: (n.) one who engages in uproarious festivities and merry-making

Jeeps full of kids with super-sonic water pistols that look like they came straight out of Star Wars pump streams of water on passers-by. Loud speakers from the pandals pump techno-beats, rock and roll, and 80’s remixes, especially the remix of “What’s Up.”  Street venders sell deep-fried crickets, barbequed sparrows, and hot samosas.

The wildest, wettest festivity in the world doesn’t happen in Thailand or South America’s Carnival, but in this country Somewhere in Asia. It’s four days long, and promises to bring out your inner child. Or inner monster. Or a little bit of both.

My friends, the revelers, have taken it upon themselves to initiate me into the Water Festival, otherwise known as Thingyan. They come to my house at 8 am, with plans to take me out, regardless of my state. 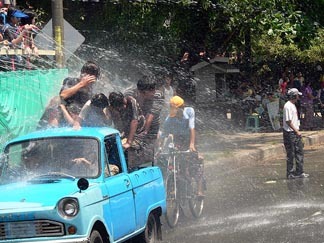 “Hurry! Hurry!” they insist. Armed with sunglasses, a sturdy pair of Crocks, and Ziplock bag to carry my wallet, I join Dancing Shoes, KK, Black Hat, and German Shepardess for a walk down my normally peaceful street. We’re heading to KK’s friend’s pandal, one of the wooden and bamboo stands that have sprung up overnight: temporary structures that have remained standing for four days for the festivities. Fifty of them, two –three stories high, line my street, most of them large enough to hold hundreds of people. Advertisements for products such as J-cup Jellies and Ve Ve rise from the curb to the pandal railing, one-story high.

The walk to the pandal for which we have “stage passes” is almost a mile away, and already the streets are crowded with revelers. It’s impossible to drive; the traffic is in a gridlock that takes a vehicle five hours to 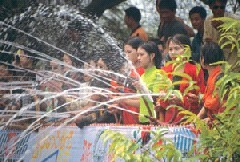 move 200 yards. We haven’t gone a hundred feet until we’re doused with water from our neighbor’s garden hose. Then there’s the kid a few hundred feet ahead, ready for us with his bucket of water. Within five minutes, we’re soaked from head to toe, and laughing all the while. We’re a sloshing group of friends, dodging the spray of fire-hoses and a hundred snake-hoses, and walking through water that reaches half-way up our shins. Everyone we pass is drenched. It’s hard to stay together, or we’ll get swept away by the crowd. Sometimes, we have to hold hands or we’ll lose each other in the masses.

Three days of partying precede us. The smell of urine is strong, at times. This is day four, after all: the fourth and final day of Thingyan. Truckloads of young teens in purple Mohawks, chains, and powdered punk hair spikes pass me, many of them smiling at the strange sight of a foreigner. Less than 500 expats live in this city of five million, so the sight of a westerner often brings giggles, stares, or the inevitable "Hello! Where are you from?" I get an extra dose of water, as does my blond friend, German Shepardess. A pick-up truck holding 30 people, with a few sitting or dancing on the cab roof, passes me and they pour ice water from cups down my back. I turn and thank them, for this is the symbolic “washing away of bad deeds”: a ritualistic cleansing for the New Year. Young lovers embrace on the hood of passing car. Jeeps full of kids with super-sonic, inter-galactic Star Wars water pistols pump streams of water on passers-by. Loud speakers from the pandals pump techno-beats, rock and roll, and 80’s remixes, especially the remix of “What’s Up.”  Street venders sell deep-fried crickets and barbequed sparrows, and hot samosas.

Then, midst the throng of thousands who walk the street or ride in packed jeeps and trucks, we see our pandal in the distance. Hundreds are already on the stage, holding neon-green garden hoses with spayers aimed at the passing cars and pedestrians. The arches of water make the journey to our destination seem like a deep 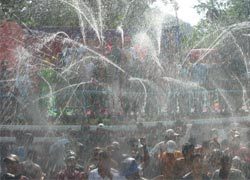 river to cross. High-pressure hoses, the kind used to put out raging fires or dispel riots, are blocking our path like electric wire. I’ve already been blasted by the water of several of these hoses: one blew my sunglasses clean off my face, and I had just walked three city blocks with my fingers in my ears to keep the water out. I am a cartoon figure: hair and clothes drawn horizontally to one side as if the winds of a hurricane have blown me to one side. Only it’s not a wind: it’s pressurized water, determined to rid me of so many bad deeds. I lock arms with Dancing Shoes and we make a run for it, fingers in our ears, giggling and screaming like school children through the triple blast of fire hoses. We’re moving targets; they won’t let up. Eventually, we’re able to duck into a small doorway, and suddenly I’m on a small side street, between the bleachers. The water is running knee high, and I almost lose one of my shoes. I look up. No spray: just clear, blue, Asian sky.

My finger tips still look like prunes.
My hair is still drippy.
It’s New Year’s Day, and thus begins year 1369.
The pandals have been dismantled. The streets have been cleaned of rubbish. All is back to life-as-usual: the heat at mid-day remains over 100 degrees F.

Four days of water is a good thing. In this hot weather, tempers boil and threaten to explode. The heat is heavy as warm honey, and it muddles the mind. It is the season when the “hot blood boils.” Four days of constant water on the skin is just as good as fans or air conditioning, and triple the fun. Come next year, Shamash will be out on the streets once again, but this time, armed with a high-powered water pistol, twice as big as anyone else’s.

It must be wonderful to watch the joy of children engaging in such free expression if not a bit damp.