« Coaching the Creative Process | Main | What Art Movement Are You? »

Mango Rains: the Monsoon Has Arrived (I think!) 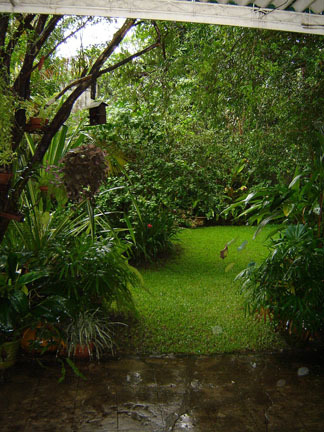 105 degrees has dropped to 75 degrees: brrr: where's the fleece?

Mother Nature is making up for the past six months of no rain.

This morning on the way to school, some of the streets were flooded with knee-high water, and at least three Friday events have been canceled due to the rain. I guess it's SE Asia's version of a "snow day."

Water matters, here, as I write in Thirst. Last year the rains hit hard, a pics of which you can see here at "And the Gods Answered" and I soon realized we'd been hit by a More Than a Thunderstorm.: a cyclone, to be exact! It's Friday evening, and all I want to snuggle in the covers like I used to do on a snow day, and read a thick novel that takes me far, far away to the land of glaciers, snow, and icicles.

Oooh, my favorite time of year!! I love the drama of a monsoon-- the swaying palm trees, the falling mangos and coconuts, the loud claps of thunder. And love how the chatter and noises typical of somewhere in Asia suddenly silence. Enjoy and stay dry!

You deserve a SNOW DAY! :O) I love the drama of crazy weather as well. We've been here in "lovely" Texas for nearly 7 months and it's tornado season and certainly the stuff of some good western novels. I keep getting excited about the thought of the new weather and of course love reading abou it through your eyes! Loved the pictures too.

Wow, what Taosenos would do for a little of that rain. It's super cold here and the fruit in all the surrounding areas has frozen. Fatima comes home today!
Hope to see you.

Freddie- how exciting to hear that we'll soon be at least on the same continent, and but an hour's plane ride away! Soon, we'll be sharing our "weather" stories. :-)