« The Mall of America: Bigger? Better? Best? | Main | The Kindness of Strangers » 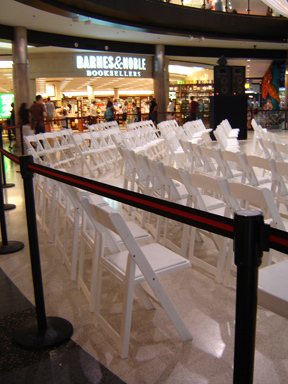 These days, it takes a brave soul to tie the knot. To mix a bit of fortune into the mix, forty couples were chosen from a lottery to marry on 07-07-07  at the Lucky in Love mass wedding in the rotunda at the Mall of America. Here’s a photo that I took of the chairs, arranged in rows of seven, and here’s why some some couples chose this lucky day to marry:

The Sunday, July 8th Minneapolis Star Tribune has this to say about the lucky number seven:

“The number seven has long been associated with good fortune. In Judaic and Christian traditions, God rested on and sanctified the seventh day after creating the universe. Buddha is said to have walked seven steps after birth. In Islamic tradition, 7, 70, and 70,000 have been used as expression of the infinite."

Since its opening in1992, over 4,200 couples have married at the mall. Yesterday, those who didn’t marry in the rotunda (where yards and yards of taffatta hung in billows from the fourth balcony) married in the Chapel of Love upstairs, far from the crowds below.

You have to love the kitchy-ness of it all: it goes along with Graceland, Vegas, and Dollywood. It's as much a part of the American pop culture (for better or worse, in sickness and health) as hotdogs and apple pie.