Diving in Bali: Breathing with the Fishes 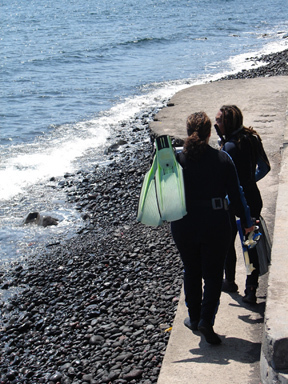 Three days of diving is not enough time to see it all: wreck diving above the submerged 350-foot long, WWII Liberty Ship, mermaiding your way along an immense drop-off reef on the other side, and establishing neutral buoyancy above the coral garden and dramatic sand slopes in between.

Tulamben Bay in Bali is worth a return trip.

Every since I was a little girl in curly-q ponytails, I’ve always wanted to fly like a bird and swim like a fish. Over a decade ago, I earned my jump certification to parachute and for one, glorious summer I flew like a bird, logging seven jumps from a Cessna into the open corn fields of rural Pennsylvania.

Still longing to scuba dive, I decided to combine my love for Balinese culture with a three-day, intense diving course in Sanur. A friend had invited me to her Bali eco resort (Alam Sari), so, with Ms. Mary Mac along for the ride to get her advanced open water diving certification, I was in good company.

So much of the PADI open water dive training was like my parachute training: 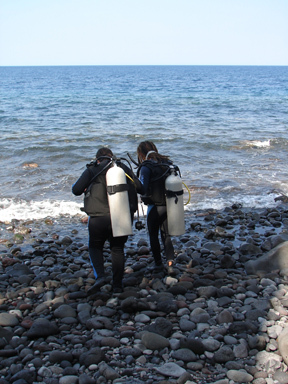 learning the gear, the safety rules, the height/depth calculations, and practice emergency drills. Even the diving “backpack” called the BCD (buoyancy control device) felt like my jump pack. The classroom requirements for diving, however, were much more extensive than my jump training: even before I entered the water, I had over eight hours of classroom work, learning terms like "residual nitrogen level" (to keep my blood from boiling with nitrogen bubbles), pressure groups, decompression chambers, underwater communication, DIN valves, equalization, free-flow regulator breathing, long shore currents, neutral buoyancy, no-mask breathing, submersible pressure gauges, thermocline, and total bottom time. By the end of that first day my brain was fried, and I had nightmares of my dive instructor, his dreadlocks writhing around his face like Medusa’s snakes, yelling at me in a monstrous voice, “What’s the correct pressure group after three, 18-meter dives of one hour long? Do the math!!! If you don’t calculate the correct the residual nitrogen level, you will die!!”

The morning of day two I awoke, nightmares gone, and my most-accomplished dive instructor Sangut of Bali Scuba took me to my first confined water dive where I learned to take off my mask under water, put it back on, clear it, and open my eyes again, all without surfacing or losing a contact lens. Thanks to Sangut’s calm demeanor, my first attempts of sharing the air from his air tank regulator were successful and not nearly as scary as I had thought, considering we were submerged in water 18 feet deep and sharing a breathing apparatus.

That same day we headed out to the reef on my first boat dive in Sanur Bay, 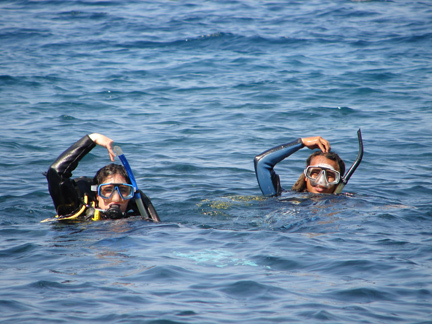 descending with my ears popping, to my first look at deep ocean floor life 35 feet under water. Looking up from that depth to the surface, with schools of teeming fish silhouetted in the bright sunlight above me, I felt as if I were a professional adventure diver who had been diving for decades, not an English teacher on her first ocean dive. I smiled so much that the creases in my cheeks broke the air seal of my diving mask, letting in water, so I had to force myself to get rid of that goofy, silly grin. As we navigated along the ocean floor using an underwater compass, Sangut used his metal pointer to point out zebra lionfish (very poisonous!), horned sea stars, Christmas tree worms, and a school of unicorn fish.

Who would have known that under the rippling sea of blue that meets the sky at the horizon in such peaceful, horizontal symmetry is a living, breathing coral reef teeming with thousands of ocean species? Head above water, I see blue on blue; head under water, I see the colors of the rainbow: yellow, purple, red, green, and neon blue: a whole other world below the waves. From now on, the mafia phrase “swimming with the fishes” will no longer be a negative term.

On day three Ms. Mary Mac and I headed two hours north with our dive instructors to Tulamben Bay for three more dives: the Liberty Ship Wreck dive, the Tulamben Drop-off, and the Coral Garden. If I thought I was in love with the ocean before, nothing – not National Geographic articles nor Discovery Channel specials nor reef-snorkeling around Caribbean islands- prepared me for the beautiful, other-worldly experience of descending down to a shipwreck covered in coral, dropping to the base of a drop-off reef to look up to the towering wall, and navigating the length of the bay above an immense coral garden glowing and flashing in the Indonesian sun. I’ve had a lot of adventures in my life, but nothing- not even jumping out of an airplane or speeding 90 mph on motorbike- beats looking down into a barrel sponge the size if a 55 gallon drum (large enough for me to fit into!), swimming with a three-foot long spot face moray eel, observing the scary-toothed open-jawed mouth of a midnight snapper waiting silently for small fish to wander into his mouth, and the Fantasia dance of blue snake sea stars, foot-long banner fish, orange and white clownfish slithering among the undulating sea grasses, and a school of twenty or more 12-inch high surgeon fish surrounding us and knocking on our masks as if they were guests at the front door. I saw triggerfish, boxfish, puffer fish, butterfly fish, gold-saddled rabbitfish, angel fish, ghost pipefish, sea slugs and a whole, magical patch of a thousand garden eels who seem to grow out of the ocean floor like thick blades of grass or fern fronds, their tiny eyes at the tip, staring and disappearing down into the sand in fear if they spot a diver or possible predator. I’ve never looked at so many fish in the eye, and they talk to me, speaking a sea language that I haven’t yet learned, but soon will, with practice. Tonight, as I close my eyes, I’m rocked back and forth by the currents of the ocean, schools of brightly-colored fish around me; I am hovering in the ocean depths as I once soared above the earth in my parachute. I am spreading my wings like a newly-hatched, yellow-finned parrotfish in a giant, exotic aquarium surrounded by all the color and coral of the world.

-for more pics of ocean life in Bali, check out this link.

Posted at 06:34 AM in Nature, Outdoors, Travel | Permalink

How exciting, Shamash! Good on yer.

How wonderful! You're doing what I've always dreamed of. I loved reading your account.

Hiya, You are so inspiring. Baby nursing, typing with one hand.
Peace

Brave woman! I love to see underwater photographs but would not ever wish to actually scuba dive. So glad you were able to enjoy it all so.