We are not Caesar, and we avoided the Forum, so I can say with confidence that The Ides of March was by 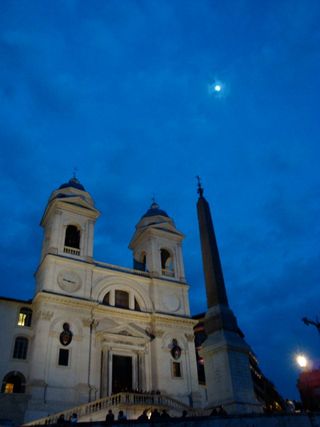 far our best day in Rome. After days of clouds and rain, the sun and the moon both showed their faces. We couldn’t seem to tear ourselves away from the Piazza de España and by dusk, we were still there, drinking prosecco at a café under moon clouds.

“How do we rearrange our lives to live in this magnificent city?” we ask ourselves. There’s something about Rome at night, especially under a waxing moon, that causes me to think that reinventing my life and steering it against all the plans that drive me forward is the most natural thing in the world to do. Here, in this city of fallen empires and lovers on Vespas, going against the current of one’s well-planned life seems possible, even wise. The words of Keats, once an expatriate in Rome,

come to me clearly from Adonais:

The Keats/Shelley House is a memorial: a museum 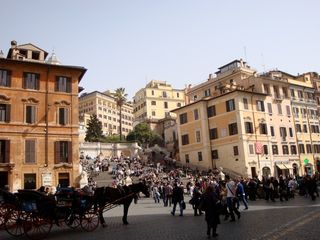 that houses paintings, sculptures, original letters, and the nineteenth century ghosts of the second generation Romantic poets who chose to live in Rome. It was here that Keats died of tuberculosis at the young age of twenty-five. As I look out of the third story window onto the Piazza de España, I think of the words that begin Keats’ Endymion: “A thing of beauty is a joy forever...” The fountains, the piazzas, the cobblestone streets, the ancient architecture of what was once the glory of Rome juxtaposed against the modern inspires the poetic spirit in any innocent abroad- especially me.

The tragic love story between Keats and Fanny Brawne (the love he left behind in England) is portrayed in the beautifully filmed movie Bright Star. The haunting scene of Keats’ black coffin carried across the Piazza de España took our breath away when we watched the movie later on our laptop. Just that morning, we had been in his house, and walked down the long, marble steps that lead from the church. 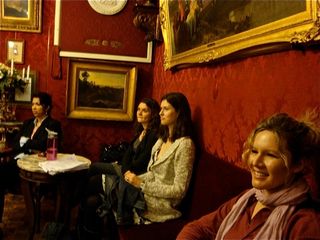 After the Keats/Shelley house, our professor led us down Via Condotti to a private room at Caffe Greco. This coffee house founded in 1760 once the served as the literary salon visited by the creative geniuses of the day: Dickens, Goethe, Hawthorne, Keats, Lord Byron, and Wagner. Rossini composed here and Hans Christian Andersen lived upstairs. As a matter of fact, I’m drinking a cup of cappuccino while sitting on his sofa. It was here that the American Magaret Fuller helped to plan a revolution that would begin the Roman Republic. Here Keats discussed poetry and American GI’s drank coffee and learned to like espresso and wrote in the guest book. Here Buffalo Bill and American Indians in full regalia challenged the local Italian cowboys to a horse tug-of-war. (Buffalo Bill and his posse won, by the way.) 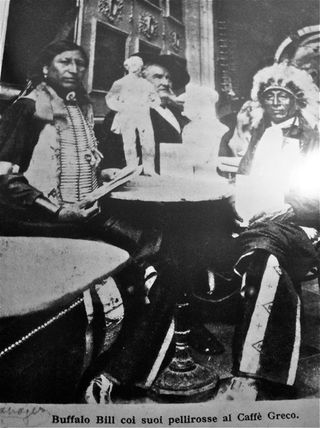 Here, under the oil paintings and fading mirrors, beside a life-size sculpture of Pan, our professor pulls out a tattered guest book, where soldiers and poets, ambassadors and artists have sketched and written. Two WWII American GI’s, (Chuck and Joe!) have drawn the American flag, and written words of longing to return to their homeland. There are several entries by them; they return each year, like Twain: the innocents, and the not-so-innocents abroad.

I am struck by how the history of this place lives on. For over 250 years, through revolutions and wars, 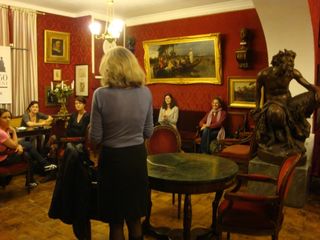 through literary movements and painting styles, Caffe Greco has served coffee (the drink of the intellectuals) to locals, tourists, and expatriates. It is here, during two World Wars that making espresso begins. Coffee beans are hard to come by, so shots of espresso, a “little” bit of coffee, becomes all the rage.

I think of the green and white signs of Starbucks, the fast food coffee for rushing business women, drive-through workers, and CEO’s. Call me a romantic, but I’d much rather have the ambiance of the turn-of-the-century literary salons, the drinking of coffee slowly (not gulped!), the marble steps, carriage wheels and petticoats of centuries past than the sterile atmosphere of thousands of modern Starbucks, the designer jeans, and  modern prefab structures. Keep the stainless steel of Dunkin 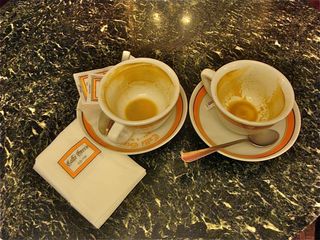 Donuts, your aisles of Walmart plastic, your unending strip malls. I’d rather die of consumption in the early 1800’s as a expatriate radical in Rome than live to be 100  in an age of nuclear meltdowns, rising sea levels, styrofoam cups, and global warming.

“But what about space travel, university education for females, film, and antibiotics?” you may say.

Yes, we should celebrate what the modern age has brought; improvements, discoveries, and inventions bring progress, including sanitation, women’s suffrage,  civil rights, and collective bargaining.

But patronize me a bit, dear reader. Allow me to imagine a life here, in Rome, during the 19th century. I’m sitting at Caffe Greco with Margaret Fuller, one of the greatest American feminists of her time. She is drinking espresso and has joined Mazzini to plan a revolution. She is wearing petticoats and has been scandalized for living freely, without a chaperone, and having a child out of wedlock. She’s hanging out with foreigners and living with an Italian. A few decades later Buffalo Bill is here, too, and I’m sitting in the corner, while Rossini composes music. Twain walks in with his magnificent mustache. Hans Christian Anderson joins us from his upstairs room. The window is open. The sounds of carriage wheels in the street drift in.

Give me that, dear reader. Afford me that one, last, great luxury of an imagination running free . 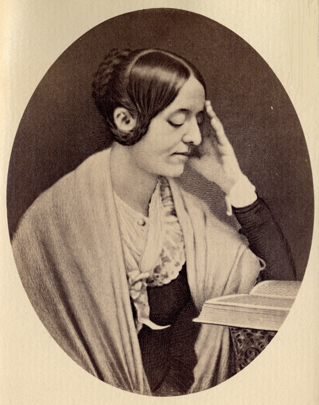 Tomorrow I will go to visit Margaret Fuller’s plaque, the only place in Rome that officially honors an American woman. I think of Laurel Thatcher Ulrich's words, "Well-behaved women rarely make history."

Margaret Fuller was overly-confident and some say she had a bad temper.

She was ahead of her time.

She was an American.

And she lived in Rome.