Steps of Broken Stones and Temples

Here in Rome, tsunamis and earthquakes seem as distant as 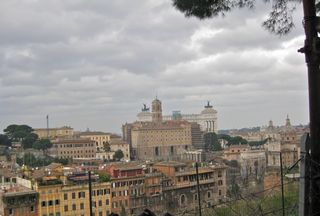 the dated letters of the 18th century Grand  Tourists- the young British noblemen who came to Rome to study Italian art and to carry marble busts and statues back home to England.

Here in Rome's historical district there are no skyscrapers, no billboards, and no high-speed expressways.  Instead, we walk over streets and sidewalks of cobblestone polished smooth by centuries of moving carriage wheels and the shuffle of pedestrians’ feet. One, red geranium peaks over a windowsill high above the street. 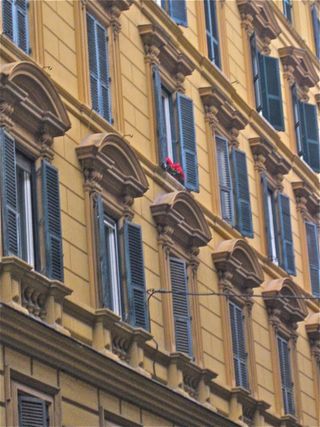 There is more marble here than tarmac, and more cafes and patisseries than fast food. Our hotel has ornate, brass handrails and well-worn, marble steps leading all the way up to the 6th floor. In this neighborhood, there is no evidence, thank Artemis, of America: no McDonald's, no Starbucks, no strip malls, no Hummers. Instead: family-run ristourantes, cafes, small specialty shops, and Vespas.

As I walk on the very stones on which Julius Caesar walked on his way to the Forum, 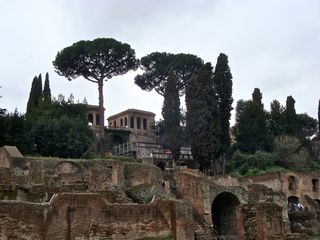 I’m struck by how the events that took place here- how Senators stood on the Speaker’s Wall and spoke to the people- were the beginnings of democracy. It is here that the Soothsayer warns, “Beware the Ides of March”, but Caesar ignores the warnings of his friends by saying those infamous last words, “I rather tell thee what is to be fear'd / Than what I fear; for always I am Caesar… I am constant as the Northern Star”. That day the conspirators (including his good friend Brutus – “Et tu, Brute?”) at the Senate plunge knives into him, killing him on the spot.

I stand on the Palatine Hill, one of the Seven Hills 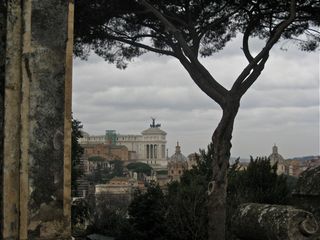 of Rome, an American who knows this city only from the words of Shakespeare, black and white encyclopedia photos, snippets from history books, and scenes from Roman Holiday and Audrey Hepburn. I think of the glory of the Roman Empire. I think of its demise.  Midst the spolio of fallen pillars and crumbling walls, the lives of senators and slaves, noblemen and farmers are remembered. Stones, statues, and steps designed by Leonardo di Vinci lead us to buildings, to ruins, to the cornerstone of the Temple of Jupiter.

“You all should shiver,” says our professor as we stand before the speaker’s wall, 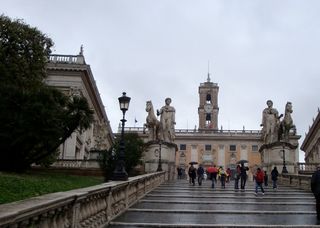 the place where Marcus Anthony said (according to Shakespeare),  "let slip the dogs of war”. It is cold and windy, and our umbrellas turn inside out. We are shivering not only because of the weather, but because we are looking at the wall where Marcus Anthony gave one of the most famous speeches in history- one that changed the course of a nation. It is here that he turned the Roman public against Caesar’s assassins. If we are quiet enough, we might be able to hear those inspired words of oratory, “Friends, Romans, countrymen, lend me your ears; I come to bury Caesar, not to praise him.” 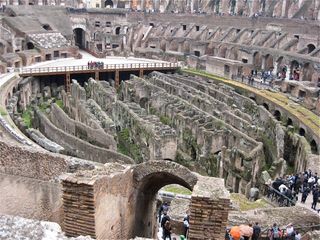 After climbing innumerable steep steps, we reach the top level of the Colosseum and look down into the green grass of the basement- the bowels of the hypogeum.  I think of how this amphitheater once held 50,000 people. I think of how gladiators once fought here, and how even in modern times, every Good Friday the Pope leads a procession to the Colosseum crosses. It was here that ancient young lovers would meet on moonlit nights and where Roman Fever (malaria contracted from mosquitoes in swamps which have now been drained) was so  greatly feared that citizens were warned not to venture out at night.

The 2,000 year-old Colosseum floor under our feet is sturdy and made of solid rock. Over 600 years ago, however, the great earthquake of 1349 struck Rome. And still, a great part of the Colosseum stands. I think of the many recent earthquakes in other cities across the world, especially this week's quake in Japan. I think of the tsunami that took thousands of lives. I think of ancient Rome, the fighting gladiators, the epidemic of Roman Fever that cost the lives of so many residents of this great city. I think of wars fought in chariots, volcanic eruptions, and pandemics.

In this century, planes have flown into Twin Towers, the Enola Gay and F-18 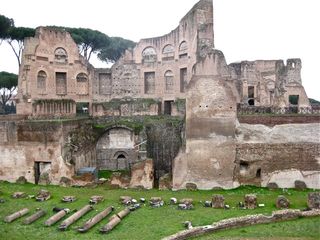 Hornets have dropped bombs on the citizens in foriegn lands, and the threat of a nuclear meltdown at Japan's nuclear reactors worries us all. I reflect on what defines a civilization, the rise and fall of empires, and how the nuclear bombs of the world, if detinated at once,  could blow up our planet forty times over.

Will our modern empires always stand? Will we keep our cities intact, our fields green, our air clean? The words in “Childe Harold’s Pilgrimage” of Lord Byron (once an expatriate who lived here in Rome) ring truer than the prophecy of a soothsayer:

Whose agonies are evils of a day –

A world is at our feet as fragile as our clay”.