The Way of Tea

"Water can quench your thirst and wine can drown your sorrows, but only tea can refresh your spirit." 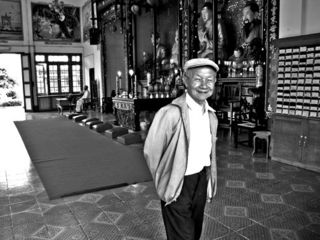 While contemporary cosmopolitan coffee shops are known for 24-hour wifi/caffeine and jolts of espresso for high-energy boosts for a better and faster life, tea houses celebrate the slowing down of things: a stepping away from sidewalk traffic into a ritual that honors that which is timeless.

It was a part of a weekly summer ritual. My sister and I would walk a half-mile down a rural road to the bottom of a steep, Pennsylvania hill to gather the wild peppermint that grew along the fence of a neighbor's pasture. As dairy cows looked on, we'd walk back home, our heads full of the heady-scent of mint and our arms full of green stems. Handing over our harvest to our mother in the kitchen was a sacred offering: something close to holy. By evening, after hours of steeping on the stove, ice-sweet peppermint tea was on the table for dinner- a summer treat as dependable and constant as watermelon, corn, and cantaloupe.

Green leaves. Picked fresh. The tenderest ones at the top, newly unfolded. 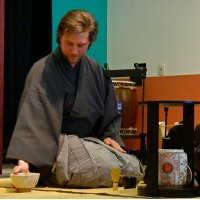 This same tradition of reverent tea picking comes, I learned, with the ancient tradition of the Japanese Tea Ceremony. Through friends who studied tea for many years in Japan, I was introduced to The Way of the Tea and ancient rituals which include hundreds of highly stylized movements and gestures. Hot water is added to scoops of bright green powder, then mixed with a bamboo whisk and served in ceramic tea bowls. The ceremony creates a quiet atmosphere as we enter a meditative state. Served with sweets that balanced the slightly bitter taste, the tea has a simple, full-bodied flavor. I grew to appreciate the ceremony so much that I invited my friend Ravi to introduce the ceremony to my high school students in the New Mexico public schools. (Read his article entitled How About a Bowl of Tea?  in The Sound Journal)  When I left the U.S. to live abroad, my final farewell was a Japanese Tea Ceremony with my closest friends attending.

I moved to Asia, where tea is ingrained in the culture much in the 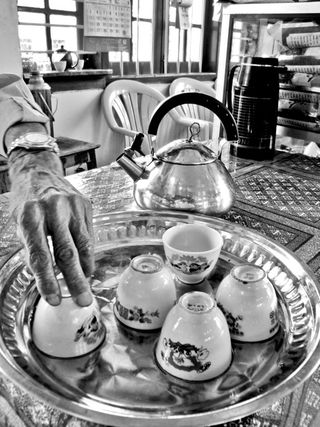 same way that coffee is in the West. For six years, while living in Myanmar, I drank the smoky-mellow Shan tea grown in the northern states located in the foothills of the Himalayas. While visiting Maymyo in the hill country of Myanmar, I chanced upon a Chinese temple where a smiling man offered me a cup of tea. The pot was metal; the tiny cups were porcelain. He smiled as he poured, extending a graciousness so simple, so exquisite, that it remains one of the highlights of my many years in Myanmar. We sat in the corner of that temple, an ageless man and a Western woman, sharing not a language nor a word in common yet connecting the way I imagine humans did before language: by a glance, a smile, a shared experience. The tea told us everything.

And now I have moved to a city in China where the teahouse culture reigns. The famous teahouses of Hangzhou attract millions of 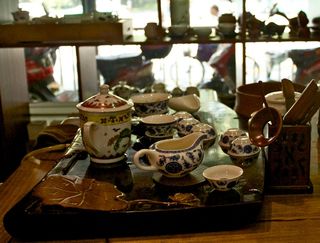 tourists, and are part of the reason that this city not only listed as "The Happiest City in China", but also the #1 tourist destination in China for Chinese citizens, surpassing the well-known destinations such as the Great Wall and the Terracotta Warriors. Teahouses grace the famous West Lake and loose tea is sold in shops and stores much in the same way that gourmet coffee is sold in cafes in the West. The only museum in China dedicated to tea, the national  Tea Museum, is found in Hangzhou.

Drinking tea at a Hangzhou teahouse is sharing a culture, a tradition of porcelain and poetry, a celebration of tea picked at just the right time of year, and day, and hour. While contemporary cosmopolitan coffee shops are known for 24-hour wifi/caffeine and jolts of espresso for high-energy boosts for a better and faster life, tea houses celebrate the slowing down of things: a stepping away from sidewalk traffic into a ritual that celebrates that which is timeless.  A friend who has been studying Chinese medicine for many years here in Hangzhou tells me that where Western medicine honors the new -- the latest scientific discoveries -- Chinese medicine honors the old. The more ancient the science, the more revered the medicine. This translates to the teahouse culture: the age-old ways of the leaf is honored. Drinking tea is a symbol of connecting to the past.

As a westerner new to the city, I'm still learning the way of tea. On the agenda for the coming months are quite a few teahouse excursions. I plan to try to find the kungfu tea boy and his long spout and spend an hour sipping a cup of the Seven Treasure tea. I will locate the Dragon Well village and order a cup of longjing tea steeped with the water of Tiger Spring. I will check out teahouses such as the Long JIng Tea Pavillion, the Lakeside Teahouse, and Harmony Teahouse.

We'll see if this die-hard coffee aficionado can be converted. If any city is going to hook me on tea, it has got to be this city: Hangzhou, the center of tea culture in China.

In his book, The Republic of Tea, Mel Ziegler predicted that the '90s would be the decade of tea, replacing the coffee-fueled '80s. That didn't happen.

My personal ratio is probably 2-to-1 in favor of coffee (coffee before noon, tea after noon).

Ian Flemming's James Bond (who drank only coffee) once blamed tea for the collapse of the British Empire.

I wonder how China's emergence as the economic power of the 21st century is going to play out in the tea houses.

Hi, Jeff.
I found my coffee source here in Hangzhou, which is a good thing. The only place that sells ground coffee beans is.... drum roll, please... Starbucks. It's a bummer. I know. But grocery stores carry only Necafe instant coffee.

I think China's emergence as a strong economic power will fuel the tea house culture. The newly wealthy Chinese have the money to be tourists, which brings them to Hangzhou and the tea houses here.

You might find this short documentary interesting. I like that Hangzhou University professors and writers are interviewed. Here's the link:

I found it fascinating!