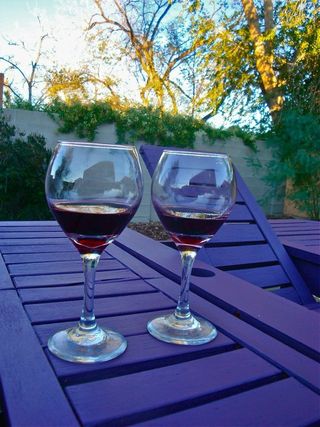 What a pleasant surprise to wake up this morning to find that NaPoWriMo listed me as the featured poet for the poem "She Was from Moscow". Thanks, NaPoWriMo!

Today's NaPoWriMo challenge is to write a tritina, which involves "three, three-line stanzas, and a final concluding line. Three 'end words' are used to conclude the lines of each stanza, in a set pattern of ABC, CAB, BCA, and all three end words appear together in the final line."

This took some brain power. The hardest part was picking which three words to use in the tritina pattern. Below is my humble attempt.

A is for Ants (Who Were Swept Out to Sea)

Morning in fruit bowl: a kind of ant-happiness

Expats: distilling the sugar, the yeast for gin-happiness

Lifting the glasses to toast, once again

The cluster, the tide, the white and red grape

The spirits, the shine, from juniper moon grapes

Each colony swimming: a fruit of vine happiness

Antennas for drinking, elixir on tongues, the tribe starts again

A dance in the sand, an ant-mortal disco: saluting the grape again and again

Posted at 06:27 AM in GloPoWriMo, NaPoWriMo, Politics | Permalink

Beautiful! And your featured poem from yesterday was quite lovely~