Bring Out the Veggies: China’s Answer to the Bird Flu 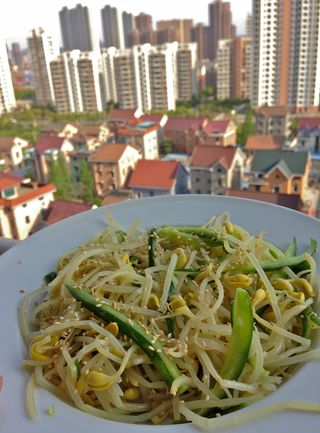 Sukjunamul, a Bean Sprout/Cucumber Salad: Yum!!
I’ve been living in Zhejiang Province near Shanghai for going on two years. There are things I love about China, and others that are a bit challenging. Like people dying of the H7N9 bird flu, for example, and the way it brings back memories of another time I wrestled with my own fears of the bird flu while living in Myanmar.

I haven’t bought or eaten pork in China, even before there were thousands of pig corpses bopping in the waters of the main river that runs through Shanghai this month. The only domestic protein in my freezer is fish, and my main protein comes when I eat out, which is often.

With diseased pigs and chickens being slaughtered thoughout the province and as concerns about China’s domestic meat market mount, I figured it’s time to start finding some good vegetarian recipes. Besides looking for ways to include protein in my diet by combining rice and beans, including whey protein powder in my morning shake, and experimenting with tofu, I’m finding some great vegetable recipes. The local City Life grocery store has an organic produce section that appeals to me, so I’ve been finding ways to incorporate vegetable side dishes into my menu. The one pictured here is a "Mung Bean Sprout and Cucumber" side dish that I found online at this link. You’ll be charmed by Korean-Canadian Maangchi who taught me, via this video, how to make the Korean dish Sukjunamul. Yummy!

It feels good to chop in the kitchen, music blaring, with a breeze coming though this 13th floor on this Sunday afternoon.  As I ponder on the fact that over half of the world's population is vegetarian, I know that I can live a long, long time without eating any meat at all.

Expat Life: The Honeymoon Is Over 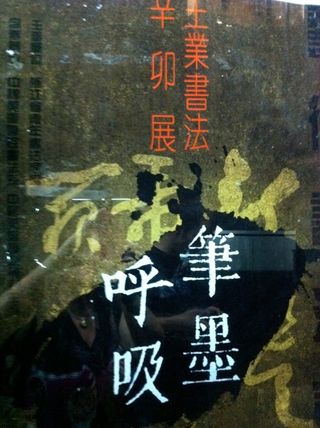 I expected my move to China to be an easy transition. Nothing could be further from the truth.

I have reinvented my life many times. Packed my belongings into cars and suitcases, locked my possessions in storage units, and taken off on yearlong road trips and planes bound for many foreign lands. I’ve lived as an expatriate for over 12 years on four different continents.  Because of this, I expected my move to China to be an easy transition. Nothing could be further from the truth.

Image: an art exhibition poster I found at the Hangzhou Academy of Art. I want to go, but first I need to find a translator.

China is not a place for a Westerner with a low tolerance for uncertainty. If you want to avoid ambiguity, it’s best to stay home. Hibernate. Find a cave and stay there. Believe me: it’s tempting. I’d probably stay home more than I do, but I avoid hanging out in my apartment with its mismatched furniture, florescent lights, and white, undecorated walls. I still haven’t figured out how to adjust the temperature of the water heater because the controls are written in Chinese. Most of the showers I take are cold.  My tiny kitchen is always hot and stuffy, so cooking is like taking a sauna. I eat out a lot.

I’ve moved halfway around the world to a country whose citizens speak a language I do not understand. I work at a new school at a job that is a brand new profession.  From my city apartment, I look out my living room window to a view of six high-rises that are over 40 stories high. I have traveled on a bullet train at 220 mph towards the most populated city in the world.

I’ve lost my frame of reference. Where’s my country, my house, my friends, my mountain, my language? I feel myself changing: shifting into an urban creature directed more by instinct than intellect. Minus language or cultural reference, I use my intuition to guide me. I am the city survivalist, trying not to crash her e-bike into the bus barreling around the corner. I communicate with non-verbal cues, expressions and gestures. I am the chimpanzee in an unmanaged zoo, trying to speak and write and talk. I’d rather be home in my forest, gently picking fleas off my cousins.

Someone once told me “We are the same people we were last year except for the books we have read, the films we have seen, the people we’ve met, and the places we’ve been.” I am not the same person I was two months ago. I am finding beauty in concrete and steel. I have learned to meditate while moving. Even though so much of New China is urban and contemporary, I am tapping into something ancient. I'm enamoured with traditional Chinese medicine, traditional Chinese massage, and the Way of Tea.

I think less about horoscopes and astrology and more about the design of buildings, the fabric of society, and how my choices and behavior affect the design of my own life.

Before living here, I swallowed the stereotypes about China hook, line, and sinker. I actually believed that everything made in China was inferior merchandise and that the Chinese were, in general, an unhappy people. Now I realize how the western media distorted my view, and how threatened the U.S. government is by the power of the Chinese economy.  The U.S. press reflects this fear. Living here has opened me up to a new way of seeing China and rest of the world.

Two months of living here, and I feel as if I have shifted on a cellular level. I’m more aware of mass consciousness. I light my nam champa incense with a slightly different prayer. The sacred tobacco seeds from women’s lodge still aren’t planted in the pots on my windowsill, but soon they will be. Only the moon makes me feel rooted – a strong and powerful connection to my former life and my community back home. I’m searching for something that’s just beyond my reach- the sound of a gong in the night air, an unexpected scent of jasmine, yellowed maps from the Old Silk Road.  I am still looking for a city tribe that understands soul matters: a group of poets, a community of artists. In my dreams, I go to the place of the mountains. I want to stay there.

I am torn between the old me and the new me, shadow boxing the questions and trying to accept the tears that come with confronting my own identity.  I am fragile. Vulnerable. They said this would happen, those experts in the psychology of expatriate living and culture shock. That the honeymoon high would wear off around the second or third month, and the oh-my-god-what-have-I-done phase would set in.

I’m at the oh-my-god-what-have-I-done phase, but I’m not quitting. I’m not running home. I’m staying, because the greatest growth is not an external process: it’s internal. The fortitude it takes to stay, when living here is so hard, has something to do with perseverance and a lot to do with hope. One day, I will call China home. I will have art on the walls, and warm lamps and showers, and a group of friends to invite home for dinner.

Until then: it isn’t easy, people.

The Way of Tea

"Water can quench your thirst and wine can drown your sorrows, but only tea can refresh your spirit." While contemporary cosmopolitan coffee shops are known for 24-hour wifi/caffeine and jolts of espresso for high-energy boosts for a better and faster life, tea houses celebrate the slowing down of things: a stepping away from sidewalk traffic into a ritual that honors that which is timeless.

Continue reading "The Way of Tea" »